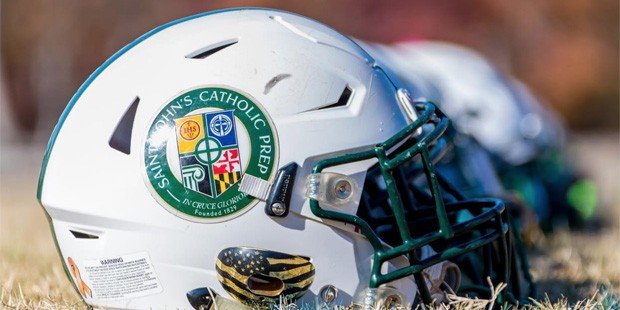 Usually playing for supremacy in the MIAA C Conference, the Vikings (1-1) and Eagles were just excited to be playing at all. In the end, SJCP celebrated a 22-21 victory, their first over AACS in four seasons, with the winning points coming on a fourth quarter safety by St. John’s defensive back Luke Hegerty.

Trailing by a point, SJCP was stopped at the AACS two, on downs, as they attempted a go-ahead touchdown drive. The Vikings defense, however, responded with Hegerty’s heroic play, as he shot a gap and a tackled Eagles’ running back Mike Zahire in the end zone.

St. John’s built a 14-0 first half lead as quarterback Michael Glover tossed a 37-yard touchdown pass to Grayson DiPietro and later rushed for a 6-yard touchdown. AACS, however, responded late in the second quarter when quarterback Aaron Rhodes connected with brother Corey Rhodes for an 18-yard TD toss, to pull the Eagles within 14-7 at the half.

Rhodes threw for two more scores in the third quarter, both 20-yarders, to account for the Eagles 21 points. In between those TD’s, SJCP’s Matt Hardin added a 14-yard rushing touchdown, to make the score 21-20 after three quarters of play.

The game was Annapolis Area Christian’s opener and it was a big bounce back for St. John’s, which lost its season opener last Friday to St. Michael the Archangel (VA), 48-6.