May 25, 2016. Severna Park High won the Class 4A/3A state boys lacrosse championship at Stevenson University. A lot has happened since that spring evening in Owings Mills when the proud Falcon program returned to elite status.

Except for one thing: Severna Park players hoisting a state championship trophy in celebration. The ninth-ranked Falcons won the 3A title with a 9-6 victory over No. 13 Mount Hebron at Loyola University’s Ridley Athletic Center. 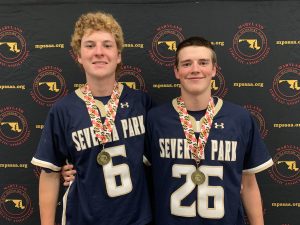 Joaquin Villagomez (left) and Parker Sealey capped their varsity careers in style Wednesday evening for Severna Park. Sealey scored twice and Villagomez finished with a goal and an assist as the No. 9 Falcons defeated 12th-ranked Mount Hebron at Loyola University’s Ridley Athletic Complex for the Class 3A state lacrosse title and the school’s sixth straight championship.

The Falcons’ 3A title Wednesday followed five in a row in 4A. It’s the 11th championship for the Anne Arundel County school passing Hereford for most all-time.

“You always want to end the season this way and only one team gets to do that,” said Severna Park coach Dave Earl.

The Falcons, who won five titles between 1999 and 2010, were in a lull when Earl, who coached at Anne Arundel Community College and St. Mary’s, arrived in 2014.

And like when Nick Saban arrived as football coach at Alabama after coaching in the NFL with Miami and winning a college national championship at LSU, Earl brought a solid resume and reputation to a Severna Park program that had the ingredients for success.

Earl, who stepped away from the sidelines last spring, became the fourth coach with five state public championships.

“I think it starts with the administration, believing in what we’re doing and not questioning what we do,” said Earl, “then it starts with the parents and the players and buying into the system. We have a culture of communication…those little things really develop trust among the players, the coaching staff.

When you have that trust and control what you can control attitude, effort and focus, I think the lacrosse follows suit.”

The Falcons used solid faceoff play from Camden Webb and capitalized on Mount Hebron’s mistakes to establish command Wednesday. After a Viking turnover, Sealey craftily spinned away from a couple of defenders and put a shot past Mount Hebron goalie for a 3-1 lead with 3:28 left in the opening half.

Severna Park got an extra-man opportunity and LaRocque finished a pass from Nolan Zborai, making it 4-1 at halftime. Villagomez converted a pass from Sealey to open the second half.

LaRocque completed his hat trick with an unassisted strike before the Falcons converted a Viking turnover into a Kevin Bredeck goal and a 7-1 advantage early in the fourth.

Villagomez, whose team lost to league rival Broadneck during the regular season, admitted there were cracks in Severna Park’s armor entering the spring.

“We were definitely doubted. We lost a lot of players from last year,” said Villagomez. “Everyone kind of just came together this whole season and just put that behind us.”

Mount Hebron, playing in its first state final since 2016, didn’t go away quietly. The Howard County school, which had one score through the first 38 minutes of regulation, scored five times in the fourth, including Tangires’ unassisted tally to bring the Vikings to within, 8-5.

But too much damage had been done.

“Severna Park outplayed us for 40 minutes ,” said Mount Hebron coach Mike McCarthy. “They dominated faceoffs and controlled possession in the first half…you can only give them so many chances.

I’m proud of my boys’ effort. It was never a question of effort, but you have to execute.”

The Falcons were reenergized after a home loss to Broadneck March 29, ending a 61-game win streak (including postseason) against Anne Arundel County foes (45 regular season). Severna Park avenged the loss with an impressive showing in the Anne Arundel County title game at Broadneck.

“They start coming together as a team three weeks ago. We started to see it click in the locker room,” said Earl, “and it really showed tonight.”