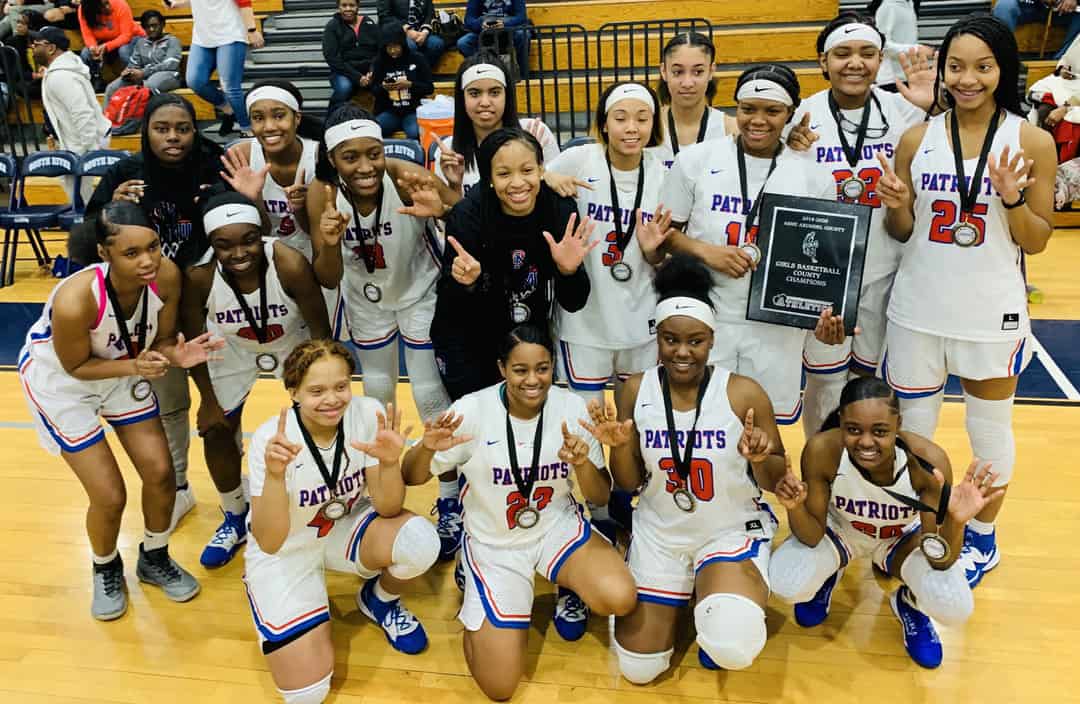 “You’re not taking it home,” said Patriots coach Rick Smith. Saniya Hymes grabbed it and wrapped her arms around it.

The Patriots are Anne Arundel champions are again and owe a huge debt to Hymes. The freshman’s basket with 7.5 seconds left in regulation lifted the 10th-ranked Patriots to a 45-44 victory over No. 13 South River in Edgewater.

Old Mill rallied from a six-point deficit in the final 2:36 of regulation, extending its title reign to six. In completing a perfect league run (17-0), the Millersville school has now won 26 consecutive decisions against Anne Arundel foes, including postseason.

Hymes corralled Mikiyah Mallett’s missed runner high off the glass and put the ball off the box, giving Old Mill its first and only lead in the final frame. She was whistled for a blocking foul on Megan Curtner with 1.1 seconds remaining.

Curtner missed both free throws and the Patriots stormed the court in celebration.

Though a freshman, Hymes was reflective – and direct – about the Patriots’ final possession.

“It was momentum…it was a lot of momentum,” said Hymes, who barely got the ball from teammate Watts on the rebound – her seventh of the game. “We had to get the ball in the basket. It didn’t matter, we needed to score.”

“I can’t take this anymore, these close games against them,” laughed Smith after a fourth one-possession victory in the last five meetings with South River. The Patriots defeated the Seahawks, 65-58, in the regular season finale Wednesday in Millersville.

Matching the Patriots’ work rate in the paint, South River (17-6) looked primed to win its first county title game since 2014 Saturday. The Seahawks went on 10-2 run in the fourth, capped with Burrows’ three-of-four free throw shooting for a 44-38 advantage.

Watts made it 44-40 after scoring off Jada Johnson’s miss, and Hymes converted two free throws with 65 seconds left to bring Old Mill to 44-42. South River missed a shot, and Mallet was fouled on a drive with 49.5 seconds.

Mallet hit one of two from the line, and the Seahawks were calling for travel with 28.5 seconds left in regulation. The Patriots turned the ball back over as Hymes mishandled a pass from Mallett with 16.2 seconds.

Hymes, who finished with 10 points, would atone.

“It’s basically trusting each other,” said Mallet. “In past county championship games I remember coming off the bench and looking up to the veterans who said we had to keep our composure. I think our captains did a good job talking to our freshmen and getting them prepare for these moments.”

Watts, who replaced Sydney Faulcon in the middle, helped the Patriots to a 24-14 lead late in the second quarter. South River scored 11 straight points as Burrows dropped a 3-pointer, giving the site hosts their first lead since early in the first quarter.

The Seahawks kept standing their ground in the paint along with hustle plays to regain the lead in the fourth. Harley Herndon found Burrows, who drained a short jumper off the baseline, capping a 7-0 run to the start the period for a 41-36 lead with 4:35 left in regulation.

It would be the last field goal for the Seahawks, who had several turnovers in the final three minutes, helping short-circuit their bid. South River is the last Anne Arundel team to beat Old Mill (56-55 victory in Jan. 2019).

Saniya Hymes was the hero for Old Mill Saturday. The freshman scored with 7.5 seconds left in regulation, giving the 10th-ranked Patriots a 45-44 victory over South River for a sixth straight Anne Arundel title.

The Seahawks and Old Mill turn their attention to the Class 4A East Region playoffs. The Patriots will be in Region I and South River in Region II. Under a new format (region winners advance to state quarterfinals and will be reseeded), the rivals could meet again.

“We’re much younger than we were last year,” said Smith. “We have a lot of youth playing a lot of minutes so we still have our work to cut out for us to get where we want to go.”