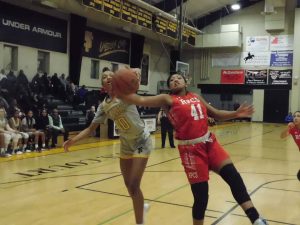 St. Frances’ Angel Reese (left) and Roland Park Country’s Christyn Robinson vie for a rebound during Thursday’s IAAM A Conference basketball match. The top-ranked Reds held off a fourth quarter surge to post a 58-57 victory over the No. 2 Panthers in East Baltimore.

Myah Simmons said she hasn’t beaten her older sister playing one-on-one in basketball. But she does have some bragging rights.

The freshman guard hit a free throw with 4.9 seconds left in regulation, giving top-ranked Roland Park Country School a 58-57 victory over No. 2 St. Frances Academy in an IAAM A Conference tilt in East Baltimore.

Roland Park withstood a Panther fourth quarter rally, completing a regular season sweep of the reigning IAAM A champs. After fending off No. 3 McDonogh School earlier in the week, the Reds have a tight grip on the top-seed for the upcoming postseason tournament.

They can thanks Simmons, who was fouled after getting the ball following Savawn Hughes’ missed free throw. With several St. Frances students trying to distract her from behind the basket, Simmons calmly hit the decisive free throw.

“It was kind of shocking, but my team had my back,” said Simmons, who finished with six points and two assists. “There was a lot of nerves, but Mir [McLean] came up to me and told me if even I missed it she would get the rebound.”

“We shoot free throws with confidence, and that’s what she did tonight,” said Roland Park coach Dani Steinbach. “She’s a freshman, but she played much more than a freshman tonight.”

Behind veterans McLean and Lawson, Roland Park opened the second half with an 8-2 run to lead, 45-34, with 3:32 left in the third quarter. But the Panthers, whose 45-game league win streak and nearly three-year reign at No. 1 in VSN’s Top 20 was ended in a 62-46 loss at Roland Park three weeks ago, stormed back.

Trailing 50-43, St. Frances got a 3-pointer and basket from Gourdine to pulled within 50-48 with 5:50 left in regulation. After teammate Anani Humphrey blocked Henson’s shot, Gourdine got the ball from Henson and passed downcourt to a streaking Hughes for a layup, giving the Panthers a 56-55 lead with 2:12 remaining.

The Reds, ranked No. 21 in the latest USA Today Super 25, quickly answered as Henson found Christyn Robinson in the paint for a basket to regain the lead with 1:59 to play. With 11.1 seconds left, Maria Ferariu missed the front end of an one-and-one for Roland Park, and Hughes was fouled attempting a shot.

Hughes made the first, and missed the second. Simmons, whose turnover on a five-second call gave St. Frances a chance at the lead in the final minute, got to Hughes’ miss and eventually converted the winning point.

With starter Rain Green done for the season with a tore ACL, Simmons knows her role has changed for Roland Park.

“I knew I had to step up and producing more for my team,” she said.

“I knew a time like this would come,” said Henson about Simmons, “and she would show up just like she did.”

Junior forward Angel Reese had 14 points for St. Frances. The Panthers were able to climb out a big second half hole, but had a couple of costly turnovers in the final two minutes.

“We controlled our own destiny…we could’ve been better,” said St. Frances coach Jerome Shelton. “We got to value the basketball more at the end of the game. Our decision making wasn’t what it should’ve been in those special situations. We got to be able to do that.” 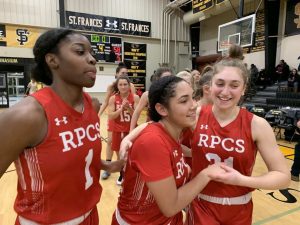 Myah Simmons (center) was the hero for Roland Park Country School Thursday, hitting a free throw with 4.7 seconds left in regulation. The win gives the Reds a stranglehold on the top-seed for the upcoming IAAM A playoffs.

It’s Roland Park Country’s first regular season sweep of St. Frances since the 2011-12 season. The Reds can secure the top-seed in the IAAM A with one more victory.