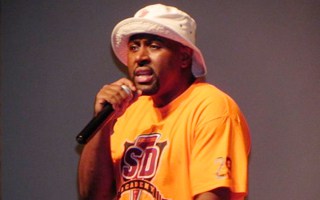 Keion Carpenter hasn’t forgotten his Baltimore roots. The former National Football League defensive back has been dedicated to helping improve the lives of local youths.

“For me to be able to fulfill my dreams, I think I owe it to my community,” said Carpenter who played for Buffalo and Atlanta during his eight-year career after starring at Virginia Tech University. “If we did what we supposed to do, watch out for the kids and the people in your neighborhood, the world would be a better place.”

Shutdown Academy is an afterschool program offering tutoring, mentoring and sports for boys’ and girls’ from five years old to 14. Basketball, cheerleading , football, lacrosse and track and field are the activities offered.

Carpenter said there’s intramurals to encourage kids to “get off the video games,” and promote an active lifestyle. His main goal is establishing a solid foundation for college.

“We have several hundred kids off the street between 4 to 8 [p.m.] in a structured learning environment,” Carpenter said. “Academics first, athletics second.”

Michael Vick, a former teammate of Carpenter’s in Atlanta who’s the current starting quarterback for Philadelphia, will be at Woodlawn Saturday with his youth squads from Central Virginia. Last year, Carpenter traveled to Atlanta with his Shutdown Academy youngsters for a football event with former Baltimore Ravens running back Jamal Lewis and Hall of Fame cornerback Deion Sanders.

Carpenter will again take several area youths back to Atlanta later this summer for another football event, and visit Georgia Tech, Morehouse and Georgia State universities.

“All these kids may not end up in the NFL, but there’s a college for all of them,” said Carpenter. If we can put the student back in the front of the athlete, a lot of kids from this area will get accepted to college.”