Second half push carries No. 3 St. Frances past Western; Bannerman and Cherisier shine 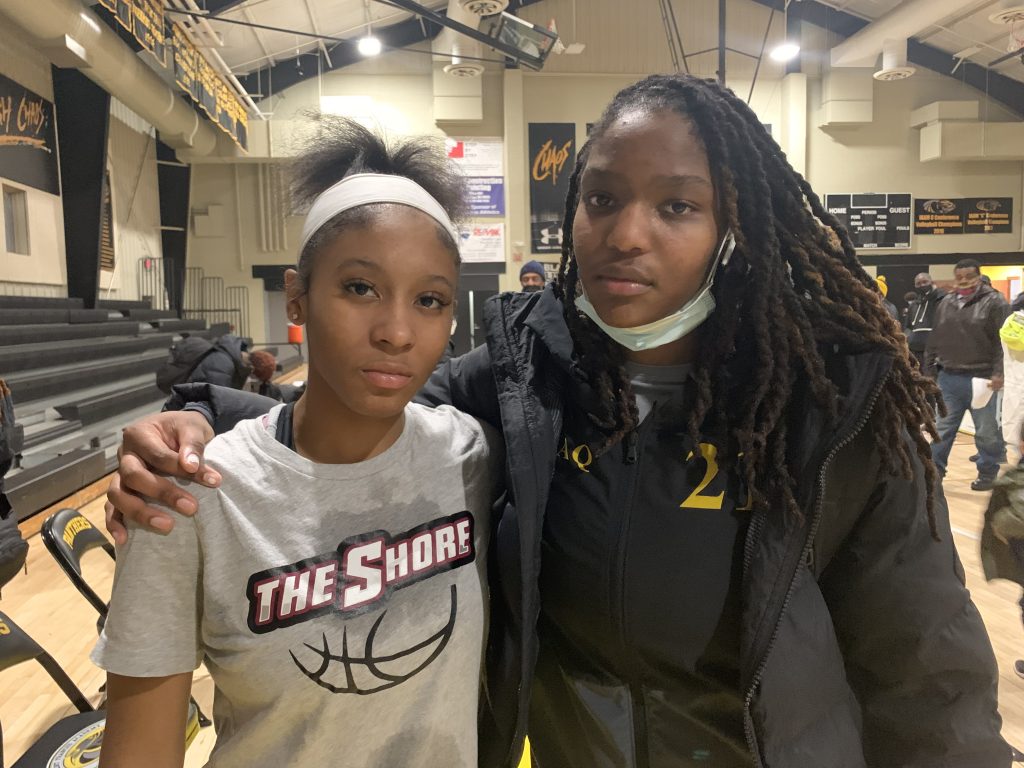 Ja’la Bannerman and And’a Cherisier carried St. Frances Academy girls basketball to victory Saturday. Bannerman scored 14 of her 23 points in the second half and Cherisier finished with a double-double of 17 points and 10 rebounds as the No. 3 Panthers rallied for a 56-48 victory over fourth-ranked Western in East Baltimore.

In the first half of Saturday’s highly anticipated girls basketball matchup between Western High and St. Frances Academy, Ny’ceara Pryor and Gabby Johnson lived up to the hype, putting the Doves up at halftime.

“I went into the locker room and told my team we got to pick it up,” said the St. Frances guard. “We didn’t get down. We kept telling each other it’s time to go. The second half it’s time to go.”

Bannerman and the third-ranked Panthers stole the show over the final 16 minutes, winning 56-48 over No. 4 Western at Phelps Gym in East Baltimore. Bannerman finished with 23 points, and post Ande’a Cherisier added 17.

Trailing by as many as 14 points, the defending IAAM A Conference champ Panthers (9-2 overall) shuttered the Doves in the fourth quarter to win the battle of Baltimore City heavyweights.

“I have so much respect for their tradition, tremendous respect for the abilities of Ny’Ceara Pryor and Gabby Johnson…we knew they were going to give us everything they had,” said St. Frances coach Jerome Shelton. “They’re big stage players.”

Pryor, who will play for Sacred Heart University next season, had a game-high 28 points while Johnson, a Morgan State recruit, finished with 14. But the Western backcourt duo had just five points – all free throws – in the final quarter.

In the end, it was Bannerman and Cherisier who took down the Doves (6-2). Bannerman scored 14 points in the second half, including a back-breaking 3-pointer with 38 seconds left in regulation.

Despite losing forward Dakerian Turner to a knee injury early in the second half, St. Frances remained focused on getting the ball inside as Cherisier finished with a double-double (10 rebounds). The 6-foot-1 junior scored six in the final quarter.

“I had to not only score, but rebound,” said Cheriser. “If I’m not scoring, I had to kick it out.”

With St. Frances down, 45-42, Cherisier finished a pass from Kameryn Dorsey and was fouled. Cherisier failed to complete the 3-point play, but, on the Panthers’ next possession, she nabbed her own miss and scored, giving St. Frances its first lead since the early in the first, 46-45. with 4:53 left.

“We’re trying to get her to slow her clock down in the post,” said Shelton. “In the second half, she hit some jump shots, I think that her confidence to finish plays around the basket.”

Off an inbound pass, Bannerman dropped another dagger, extending St. Frances’ lead to 49-46. Cherisier made it 51-46 with a quick drop shot in the paint with 2:09 left in regulation.

The first half belonged to Western, specifically Johnson and Pryor. The combo had all the points as the Doves established a 15-6 advantage in the first.

Pryor, off an outlet from Johnson, made it 21-12 in the second quarter, and followed with a 3-pointer, advancing Western’s advantage into double-digits. The shifty Pryor got a loose ball and scored, putting the Doves up 28-14 with 4:13 before halftime.

Trailing 33-24 at intermission, St. Frances came out reinvigorated for the second half. The East Chase Street school scored seven straight to close to 33-31.

The Doves answered as Pryor grabbed an errant pass and scored, putting the visitors up 37-31 with 4:13 left in the third. Another Pryor score had Western ahead, 41-35, with 1:01 remaining the quarter.

It was the last basket the Baltimore City public stronghold scored in regulation as St. Frances pushed up defensively on Pryor and Johnson.

“We were trying to find the right formula defensively where he could limit their ability to get to the basket,” said Shelton. “Most importantly, we closed out defense very well with our rebounding.”

Western coach Tasha Townsend thought her team wore down in the second half.

“Gabby and Lil’ Mama (Pryor) didn’t get to the free throw line, they got tired,” said Townsend. “We needed this to know what to look forward to come to states. This was a great atmosphere. The girls haven’t been in a crowded gym in a long time.”

“We think we can beat them. We have to mentally take them out the game,” said Bannerman. “Eventhough they’re long and pretty good, we feel we can overcome them.”