South River’s Ashlynn Burrows hit the 1,000-point career scoring mark, finishing with 20 points in the No. 9 Seahawks’ victory over Liberty in the opening round of the Howard Holiday Tournament Thursday. South River will play No. 5 Howard in Friday evening’s title game.

A matchup of undefeated girls basketball teams is set as No. 9 South River High and fifth-ranked Howard will play Friday evening for the Howard Holiday Tournament title. Both squads won opening round matches Thursday in Ellicott City.

Behind a historic performance from Ashlynn Burrows, the Seahawks defeated Liberty, 58-49, in the opening game. Burrows, a senior forward/guard, scored 20 points to surpass the 1,000-point career mark.

Julia Fitzwater added 13 points for South River (6-0 overall), and Alaina Goodwin finished with 10. Howard won for the seventh time in as many starts with a 53-23 victory over Catholic.

Wagner College commit Marisa Sanchez-Henry had a game-high 13 points for the Lions, and Camille Malagar added 10. Howard held Catholic to six second half points after establishing a 30-17 halftime advantage.

It will be the third straight year Howard and South River meet in the Lions’ holiday event. Howard defeated the Seahawks, 59-53, in last year’s title match. 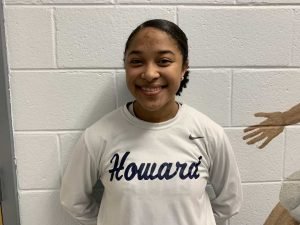 Marisa Sanchez-Henry helped Howard remained undefeated. The senior guard had 13 points in the No. 5 Lions’ victory over Catholic.