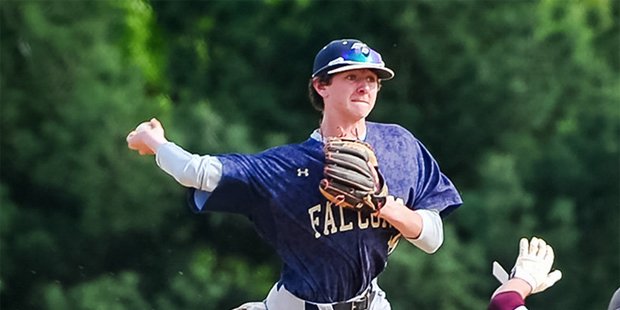 Jackson Merrill of Severna Park High School, the 2021 Varsity Sports Network Baseball Player of the Year, was selected in the first round, with the 27th pick overall, by the San Diego Padres during the MLB First Year Free Agent Draft Sunday night in Colorado.

A home run hitting shortstop with excellent defensive skills, Merrill tied the Falcons’ school and Anne Arundel County record for home runs (12) in a single season, one short of the state public school record, while batting .500 with 37 RBIs and 32 runs scored. He led the Falcons to the Class 4A State final and an overall 17-1 record

“Everything has been crazy around here since we found out,” said Merrill Sunday night from his Severna Park home where he celebrated with his family, grandparents, cousins, friends and teammates.

“It’s what I was hoping for. My family is ecstatic.”

His name was called on the MLB Network Sunday night and the draft will continue today (Monday) starting with the second round and concluding tomorrow (Tuesday) through 20 rounds.

Merrill was somewhat of a surprise going in the first round. He was expected to be drafted but only Varsity Sports Network locally projected him to be selected as high as the second or third round.

“I thought I had a chance to go in the first round, but I’m still putting it all together,” said Merrill, who indicated he would most likely sign and not attend the University of Kentucky where a baseball scholarship is awaiting him.

Padres’ area scout Danny Sader contacted Merrill last night to congratulate him and will be getting together with him this week to discuss negotiations on a contract.

Merrill was one of 11 shortstops among the 36 players chosen on the first day of the draft and 19 total high school players.

The last high school player with local ties to be drafted in the first round was also by the Padres and also a shortstop in Scott Halloran of Fredericksburg, Va. Halloran played with the 1995 Gunther’s Little Orioles National CABA 18 & Under Champion based in Baltimore and Anne Arundel County.

Gary Kendall, who manages the Orioles’ AAA Norfolk team was the Padres scout who drafted and signed Halloran in 1996 out Fredericksburg High School.