Brannen leads defense as No. 2 Falcons edge No. 4 Glenelg 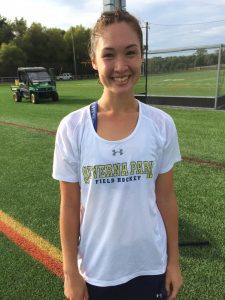 Severna Park took a one goal lead to intermission and then played great defense against a speedy and aggressive Glenelg squad, in a scoreless second 30 minutes, to post a 3-2 victory over the visitors in a field hockey showdown played at Kinder Farm Park on Tuesday afternoon.

Kinder Farm has been the site of most Severna Park boys and girls athletic events over the last two years as the Falcons await the completion of a new stadium under construction set for the spring of 2018 on the school grounds on Robinson Road.

The No. 2 ranked Falcons (2-0) made the No. 4 Gladiators (their fans and parents call them “red” not the assigned nickname) their second straight Howard County victim as sophomore Lila Slattery fed junior Delaney Ott the game winner with 3:57 remaining in the first half. The goal stood-up as the inspired Falcons’ defense led by senior midfielder Megan Brannen and senior goalie Madison Nutter, who had 9 saves in the second half shut down the Red.

“I was not happy with the way we played,” said veteran coach Ann Andrews, who is in her 18th season with the Falcons, the last six as head coach after succeeding the legendary Anne Arundel County Sports Hall of Fame coach Lil Shelton, who spearheaded a Maryland record 23 state championships with Andrews.

Coach Andrews’ team came into the game with a 2-1 victory over another Howard County foe in Marriotts Ridge, but expected Glenelg to be even tougher and they were. Glenelg (2-1), last fall’s Howard County champion had knocked off defending Class 4A State champion South River, ranked then at No. 6 in the VSN poll and currently No. 11, by 3-1 before blanking Howard, 5-0.

“Any win is a good win, but we have to play better,” said Andrews, whose team is coming off a rare down season at 9-5-2 in 2016 after reeling off three consecutive Class 4A State championships, but has a seasoned team this fall with 11 returning seniors to go with 12 juniors. “Glenelg beat us to a lot of balls, but we stepped it up when we had to against a very physical team.”

It was good that they did because as Brannen said afterwards, “It was stressful, but we stepped it up and started connecting on our passes.”

Brannen connected with a pass to Slattery with 12:41 left in the first half to give Severna Park a 2-1 advantage, after junior Kate Bray assisted senior Ashley Bellotte approximately 12 minutes into the game to tie it up at one. Glenelg had jumped out to a 1-0 lead in the early moments on a goal by sophomore Kathryn Hoffman and would tie things up at 2 on a goal by junior Tess Muneses, off a nifty slide from standout senior midfielder Paige Reese on a breakaway with just under 10 minutes on the scoreboard in the first half.

Ott tallied what proved to be the game winner about six minutes later and that would close the lid on the scoring as the respective defenses responded with aplomb, especially the Falcons’ unit.

“Their defense was son strong, especially in the circle,” said Glenelg coach Nicole Trunzo. “We put forth a great effort, but just ran out of time. We missed opportunities on offense.”

A lot of the reasons for the “missed opportunities” came from the know-how and savvy of the veteran Brannen and senior defender Mallary Sellars, not to mention the Ravens’ purple-shirted keeper in Nuitter. Nutter was like a stone wall recording all 9 of her saves in the final 30 minutes and well-poised in a frantic final two minutes.

Glenelg, with a fiery senior in Gaby Garofolo leading the way, kept the pressure on Nutter and the Falcons down the stretch. The relentless attack on the Falcons’ cage resulted in two shots zonking the top of the goal, just missing the tying marker.

As Brannen noted, “It was stressful,” for she and the Falcons, but they left with smiles on their faces, not so for the Red.