Severna Park climbs to No. 2 in VSN Baseball Top 20 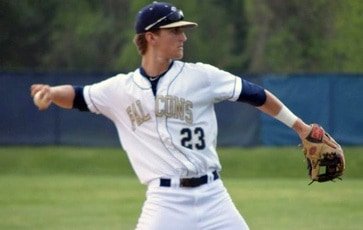 Top-ranked Curley goes for first MIAA A title since 2001

Curley (27-4) won the MIAA A Conference regular season title and now hopes to add the post season double-elimination tournament title against a streaking sixth-seeded Gilman Greyhounds team (15-13) that started off by upsetting then No. 2 John Carroll, 5-3. The Greyhounds then dropped a 4-3 decision to Curley, 4-3, but bounced back to eliminate Calvert Hall, 4-3 and Loyola, 2-1 to advance to the finals where they have to win two straight over the Friars.

Gilman, winners of six of their last seven games, has vaulted from No. 17 to No. 14 in the Top 20 this week while Calvert Hall dropped from No. 11 to No. 15 after being eliminated in the MIAA A Conference Tournament. Coach Mike Kelly’s Loyola Dons (16-11), the 2017 A Conference champion, made another good showing in the post season tourney before bowing to Gilman on Sunday.

With John Carroll (20-6) being eliminated by Loyola, 8-2, the Patriots slipped from No. 2 to No. 3 as Severna Park (20-3) moved up to the second spot from 3. The 4A East champion Falcons will go after the Class 4A State title this week, starting Tuesday night (May 22) at Shirley Povich Field in Bethesda vs. C.H. Flowers of Prince Georges’ County.

Hard-hitting Severna Park out-slugged Leonardtown, 9-7 to win to the 4A East region Saturday night at Blandair Regional Park in Columbia and with a win over Flowers will face the winner between No. 5 Howard (18-4) and Bethesda Chevy Chase Friday night at Ripken Stadium in Aberdeen (7:30 p.m.). A Severna Park/Howard matchup would be wild since the Howard County Lions upset the Falcons in last year’s 4A State semifinals.

Howard moved up one spot in the VSN Poll as did No. 4 Marriotts Ridge (17-3). The Mustangs of Howard County are seeking the Class 2A State crown, but must win on the road at LaPlata (18-5) of Charles County to win the 2A South and a berth in the final four.

There were only a few minor changes elsewhere in the rankings but Sparrows Point (14-6), which debuted in the Top 20 a couple of weeks ago, has returned at No. 20 with Baltimore County neighbor, the Kenwood Bluebirds (14-5), who were eliminated 8-2 in 3A North by No. 7 Bel Air (15-2). The Pointers visit Baltimore’s Frederick Douglass at Druid Hill Park today (May 21) to settle Class 1A North Region.

Editor’s Note: The VSN Baseball Top is compiled by veteran high school baseball writer and historian Pat O’Malley. He welcomes input from coaches on the poll. He can be reached at 410-647-2499 or patomalleysports@aol.com.

Here is the entire VSN Baseball Top 20 for week 8:

This week: vs. No. 14 Gilman MIAA A Conference Tournament Finals, at Harford Community College, 5-20

This week: Class 4A State semifinals vs. Bethesda Chevy Chase at Shirley Povich Field at 7 p.m. 5-22

Last week: lost to then No. Severna Park, 4-1 Class 4A East Section 1 Final

This week: vs. No. 13 Chesapeake-AA Class 3A East Final at Blandair Regional Park, 5-21

This week: vs. No. 1 Archbishop Curley MIAA A Conference Finals, at Harford Community College, 5-21

This week: at Douglass-Balto., Class 1A North Final at Druid Hill Park, 5-21