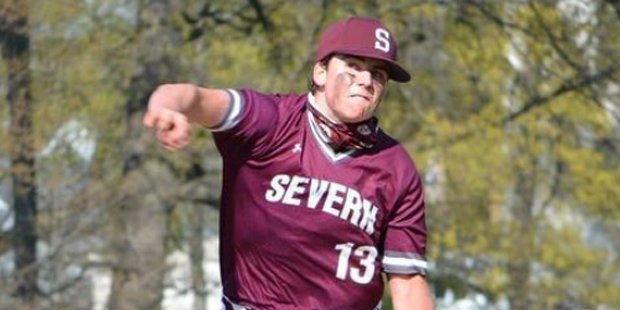 After both teams rallied in a wild seventh inning, visiting Severn School scored five times in the top of the 8th inning and then held Our Lady of Mount Carmel scoreless to take an exciting, 12-7, MIAA B Conference baseball victory on Thursday.

Severn loaded the bases, with a couple of walks and a hit batter, with one out in the eighth and regained the lead with an RBI single by Christian Grimes. Another walk and a fielder’s choice grounder brought home two more runs and Ben Champion plated the final two with a single to right.

Grimes, who came on to get the final out in the 7th and end Mount Carmel’s four-run uprising, allowed a leadoff walk to the Cougars in the bottom of the 8th, but retired the next three batters, including two by strikeout, to procure the victory for the Admirals.

Severn had scored two runs in both the first and third innings and Mount Carmel got on the board with three in the home half of the third. It stayed that way until of the seventh, when Severn scored three times to build what seemed like a commanding 7-3 advantage.

Pictured above: Severn pitcher Tristan Collins, who made the start and pitched into the seventh inning, struck out seven, but received a no decision.

In Brooklandville, host St. Paul’s broke open a close contest with a nine run bottom of the fourth inning and held Gerstell Academy scoreless in the top of the fifth to claim an 11-1 MIAA B Conference baseball win.

St. Paul’s (8-1 overall, 2-1 MIAA B) started its big rally with a one out walk and, after two down got a single and an error to plate their third run of the game. Jack VanValkenburgh then added an RBI single, Alden Crowmell drove in two with another single and John Padousis launched an RBI triple. The final two runs came across on RBI singles by Zach Felton and Matt Meck.

Old Kopano was 2-for-3 with three RBI’s and a run scored for the Crusaders. Cromwell tossed the first four innings and earned the win and Luke Trotta pitched a scoreless fifth. The two combined to hold the Falcons to just one hit which was an RBI double by Graham Vaeth in the third.

Visiting Glenelg Country scored six times in the top of the seventh inning and held Indian Creek scoreless in the home half of the inning to leave Crownsville with a 12-6 MIAA B Conference win on Thursday. The victory keeps the Dragons undefeated on the season, while Indian Creek suffered its first loss.

Dylan Melton started for the Dragons (6-0 overall, 3-0 MIAA B) in the seventh with a leadoff double and scored on an error. The next two runs of the inning also came around on an error. GCS then added a sac fly from Trey Miller and a 2-run single from Dylan Levin to complete the winning rally.

Those fireworks all came after Indian Creek (4-1, 4-1) had battled back from a 6-1 hole with two in the fifth and three in the sixth.

Melton, batting in the leadoff spot, went 3-for-5 with two runs and an RBI. Two of his hits went for extra bases, as he also had a triple. Miller added two hits, two runs and two RBI’s and Levin finished three runs knocked in and pitched a scoreless seventh to earn the save.

St. John’s broke a scoreless tie with six runs in the top of the third and added four more in the fourth.

Lowrey helped his own cause with an RBI and two runs scored, while Gabe Casteel went 3-for-3 with a double, two runs scored and an RBI. Nick Grutzkun and Brandon Pershen each had two RBI’s.

St. Vincent Pallotti was leading Friends School, 6-0, when their MIAA B Conference baseball game was suspended at the start of the top of the seventh inning.

Kendall White had driven in two runs for Pallotti, which scored once in the third, twice in the fourth and three times in the sixth. Josh Randolph, Christian Hobson and Tony Sigg also had one RBI each for the Panthers.

As of this writing there is no information available on when the game may be completed.