Admirals improve to 4-0 with a win at St. Paul’s in MIAA B Conference opener 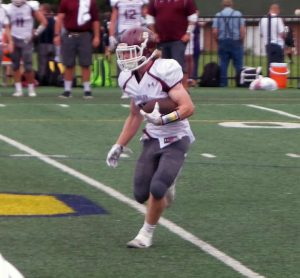 Henry Rentz rushed for what proved to be the winning touchdown in the second half of Severn’s 13-12 win over St. Paul’s.

Severn School continued its outstanding start to the 2017 football season, hanging on for a 13-12 victory over host St. Paul’s, Friday in Brooklandville in the MIAA B Conference opener for both teams.

Severn junior quarterback Craig Stevens threw a pair of first half interceptions, but led a 10-play 69-yard drive that ended with a 15-yard touchdown pass to senior Jakob Lilly, with 10:15 remaining in the second quarter, as the Admirals took a 7-0 lead into the half.

St. Paul’s (1-2, 1-1) pulled within one twice in the second half, with a pair of touchdowns, but Severn’s second score, a 1-yard TD run by Henry Rentz proved to be the game-winner.

The Admirals also got a an interception from Joel Mandish and blocked punt from Kendall Harmon.