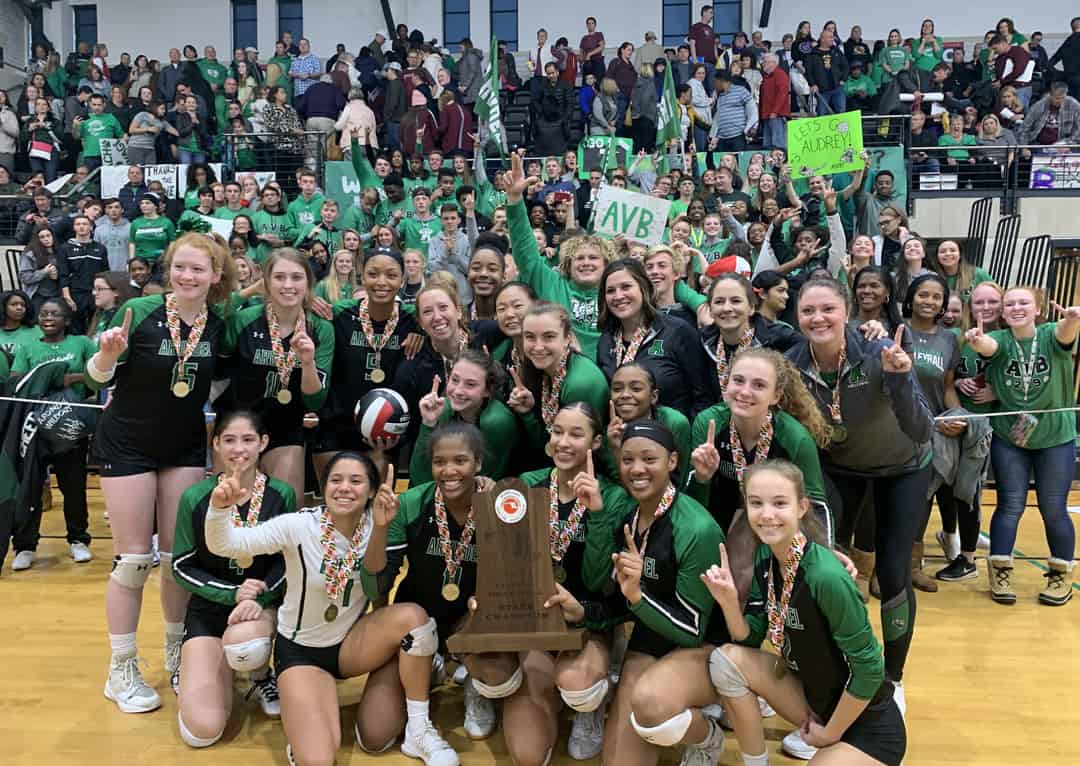 Not much separated the Arundel High and Broadneck volleyball teams this fall. They split their regular-season meetings, both in four sets.

Not much separated the two in the Class 4A state championship either.

The teams split the first four sets of the title match Saturday before No. 3 Arundel finally pulled out a five-point victory in the fifth set over the second-ranked Bruins to win the first state volleyball championship in school history at the University of Maryland’s Ritchie Coliseum.

She and her teammates gave a lot of credit to the Arundel fans, who provided a raucous cheering section in one of the biggest crowds ever to watch a state volleyball final.

“We needed them today,” Watts said. “It’s like having a seventh person on the court just cheering you on. Everything, the gymnastics in the middle, them just getting us hyped before the game — everything helped us.”

The Wildcats (16-1 overall), suffered their only loss to Broadneck, in the Anne Arundel County title match. The Bruins (17-3) lost only to the Wildcats and to last year’s Class 3A champion Atholton.

Saturday, the Wildcats started strong, running up a 10-3 lead before the Bruins rallied to tie at 18. Three aces from Aaliyah Griffin and a couple of kills by Watts helped Arundel hold on to win. Much of the last four games was back and fourth.

In the fourth game, Broadneck ran up a 21-12 lead on Grace Phelan’s kill, but the Wildcats rallied to within 22-21. A couple Arundel hitting errors gave the Bruins set point. Their setter, McKena Smith, made a terrific dig to save the point polished off on a kill by Emma Quandt, who led the Bruins with 15 while Natalie Luscomb had 12.

“I’m really happy we had the opportunity to fight for the win in the fifth set,” Broadneck libero Reiland Brown said, “and I’m glad that we just worked so hard in every set win or lose.”

For Arundel,  however, the momentum gained in the late fourth-set rally carried over to the final set.

“We pushed through every single point, especially in the fourth said,” Watts said. “We were down … but we never gave up. We just pushed and kept pushing. We knew we could come back again.”

Arundel libero Fiona Gonzalez Medina said they had a mini-goal to start the deciding set.

“We told ourselves that we had to be the first ones to get five and we did,” she said. “It encouraged us to keep getting the points that we needed until it was 14-10 and it was the last serve and it just felt amazing.”

Broadneck’s Luscomb opened the fifth set with a kill, but four Bruins hitting errors helped the Wildcats take a 7-3 lead. Broadneck then scored three straight points, including a Quandt kill, but the Bruins would not score back-to-back points again and had six more hitting errors.

“We utilized the momentum we had in the fourth really well and that’s why we were able to win it,” Quandt said, “and then I think it just shifted in the fifth set.”

Both teams played exceptional back court defense. Arundel had 81 digs and Broadneck had 65. Brown had 20. Gonzalez Medina and Ashley Barnes had 17 each for the Wildcats.

The Wildcats offense, however, was more balanced and was more effective from the middle than Broadneck’s with Ragler and Abrielle Scrivner (six kills). The two also had a hand in nine blocks.

The Wildcats “worked hard. They were not letting balls hit the ground. They stayed offensive. They didn’t let up. They played great,” said Broadneck coach Tracey Regalbuto, whose program has won six state titles, most recently in 2009.

“I have a very bittersweet feeling,” Regalbuto said. “I’m really proud of them for taking on that team and going to five and getting to this point period. Obviously, I’m disappointed that we lost… but I’m super proud of them for never quitting. The fans were really loud in there and could have been really easy for them to crumble ad I feel like they didn’t. They fought every set.”

Smith had 26 sets while Arundel setters Barnes and Abby Niles combined for 22. 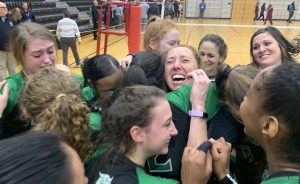 Arundel volleyball Ashley Yuscavage is hugged by her players after winning the Class 4A state championship Saturday afternoon. After three previous final losses, the Wildcats broke through with a five-set decision over Anne Arundel County rival Broadneck in front of nearly 1,500 inside Ritchie Coliseum.

Arundel, which fell in the state final two years ago and has been to the state tournament five times without a title, is still a young team. Most of its key contributors will return, including Watts, Ragler, Griffin, Gonzalez Medina and both setters. Barnes, Niles and Ragler are sophomores.

“It’s really exciting,” Arundel coach Ashley Yuscavage said of having so many players who will return next fall.

“This is about taking one more step. Every game has to be one step forward and I think our story isn’t over. This is just one more amazing, incredible step, but there are more steps for us to keep going together and I think we’ll keep taking them.”