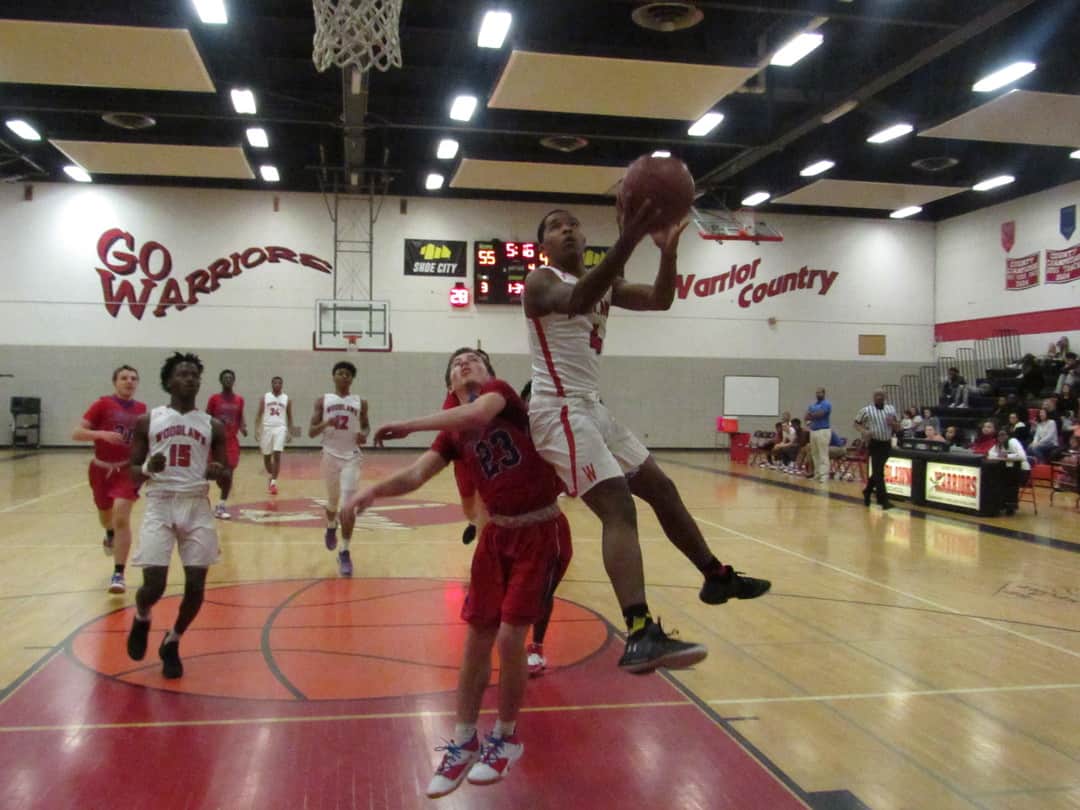 Woodlawn’s Cedric Barnes heads to the basket ahead of Lansdowne’s Teylor Silverman during Friday’s Baltimore County boys basketball contest. The No. 17 Warriors clinched a spot in the league championship with a 67-46 decision.

As the final seconds ticked off in Woodlawn High’s boys basketball victory over Lansdowne Friday, Emmanuel Rice playfully shuffled his feet as he bounced the ball between his legs. Rice passed the ball to teammate Tyray Cooper who did the same move.

The 17th-ranked Warriors can put on some dancing shoes because they’re headed to Towson University after a 67-46 decision over Lansdowne in a Baltimore County Division II contest on Woodlawn Drive. Cooper finished with a game-high 24 points for the Warriors, and Rice added 14.

Woodlawn (14-3 overall) went on a 17-0 run between the third and fourth quarters, extending its winning streak to nine and securing first in Division II (10-0). The Warriors will play for the Baltimore County championship, Feb. 25 at SECU Arena in Towson.

Longtime Woodlawn coach Bobby Richardson said grit and determination has his squad in position for a second league title in three seasons.

“Our parts are greater than its sum…We focus on defense, hustle, being scrappy,” said Richardson, whose tallest player is 6-foot-5. “Just playing hard basketball.”

“We’re a family, we hold each other accountable,” said Cooper. “We don’t take any game slightly.”

The Warriors led 36-29 at halftime Friday, but Lansdowne (10-5, 8-2 Division II) scored the first seven points of the second half to pull even. The Vikings gained the lead, 40-38, on Tony Green’s basket with 3 minutes, 2 seconds left in the third.

Woodlawn began pressuring the ball and denying Lansdowne guard Teylor Silverman, who finished with 22 points. The Vikings turned the ball over on the inbounds after the Warriors tied the match on two free throws from Kameron Downs.

After three Woodlawn misses at the basket, Cooper got the ball to fall through for the lead. Rice followed another Vikings inbound fail with a 3-pointer and Cooper stole the ensuing inbounds and scored an easy layup.

Lansdowne finally got the ball downcourt, but Dooley Riggs blocked Silverman’s shot, and Downs finished with an uncontested layup. It was 55-40 after Jordan Allen’s basket with 6:52 left in regulation.

“Identify, like any good basketball team, who’s their best player…cut the head off the snake,” said Richardson. “Sometimes there’s two, but there’s only one basketball and if you’re in sync on defense, you have a very good chance to being successful.”

“Once we did that, it was fast break points and layups,” said Downs, who scored 10 points.

The Warriors haven’t loss since a 48-45 decision to No. 7 Edmondson at the Basketball Academy at Morgan State’s Hill Field House last month. Woodlawn also played Dunbar at the annual mixer, and matchup with No. 5 City College and defending Class 2A state champ Patterson over a five-game stretch.

“We knew those games would be tough so we had to keep our heads up,” said Cooper. “We went 2-2 and could’ve done better, but we’re progressing more and more and growing as a family.”

Tyray Cooper and Kameron Downs combined for 34 points as Woodlawn won its ninth straight game. The Warriors will play in the Baltimore County final, Feb. 25 at Towson University’s SECU Arena.

The Warriors have road matches at No. 16 Glenelg Country School, 11th-ranked and county rival Dulaney and Dundalk in their final full week of regular season play. Woodlawn will play either defending county champ New Town, Parkville or Dulaney in the county final.

“Next week will be challenging, but it will make us better,” said Richardson, whose team has lost in the 3A North Region final in two of the previous three seasons. “We’ve clinched but we’ve got some games down the road. We know what’s in store.”