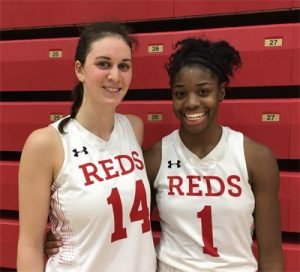 After all, the top-ranked Panthers, who had not fallen to a conference foe since bowing to McDonogh School  in a 2015 conference semifinal, 45 games ago, were in complete control well into the second period against the No. 2 Reds in a showdown between the private school league’s last remaining unbeaten teams.

When St. Frances’ Aniya Gourdine buried a pair of 3-pointers in the first quarter to help her team to a 15-6 lead heading into the second period, the visitors maintained their nine-point cushion, 19-10, early in the second quarter on Angel Reese’s put-back — one of a game-high 18 rebounds for the star junior center.

Yet the Reds stood firm despite the deficit and never faltered once they took the lead for good on McLean’s drive that was part of a game-changing 19-3 run in what turned out to be a 62-46 Roland Park victory,.

It was Roland Park’s first triumph over the the Panthers since Jan. 23, 2015.

“We just tried to stay together and persevere through adversity,” said McLean, who finished with 20 points and 16 rebounds as the Reds (16-1 overall) took over first place in the league (6-0). “We didn’t want to go at each other. We wanted to go against (St. Frances).”

While McLean started the comeback with a bucket, she had plenty of help from senior Maria Ferariu, who poured in 14 points in the second quarter alone and led all scorers with 22 points.

“My teammates were feeding me,” said Ferariu, who also had six steals in the game. “They tell me to keep shooting. They always have my back.”

Considering that Ferariu drew the game’s toughest defensive assignment in guarding the agile 6-foot-3 Reese, the Drexel University recruit was backed up with help defensive help from McLean, senior forward Christyn Robinson (7 rebounds) and others.

“Maria is an intelligent defender,” Roland Park coach Dani Steinbach said. “She just has a knack for where to be. That’s why we put her on Angel. But she had plenty of help. We played great team defense, and a lot of our offense came from playing defense. Maria just got crazy hot in the second quarter.”

Even though the Panthers mounted a comeback of their own in cutting a 29-22 shortfall to 29-26 at the half on two Reese free throws and a Gourdine layup at the buzzer, the Reds pulled away early in the third quarter on a 3-pointer by junior guard Rain Green (12 points, 5 rebounds, 4 assists), a Ferariu drive, a McLean basket and free throws by Green and senior point guard Ja’Niah Henson.

Reese’s drive was the only resistance during that stretch that ballooned the Reds’ advantage to 39-28 midway through the period.

Although the Panthers (11-2, 6-1 IAAM A) drew to within seven points on a Reese bucket early in the fourth quarter, a Green layup and an ensuing free throw bumped the margin back to double digits. St. Frances cut the lead to seven on a fast break basket by Khalia Turner with just over four minutes left in regulation before McLean’s free throw and coast-to-coast maneuver restored a 10-point difference.

Gourdine converted twice from the line a minute later to slash the Reds’ advantage to 53-45, giving the Panther faithful a glimmer of hope until McLean finished a long outlet pass and was fouled. Her free throw made it 56-45 with time running out on St. Frances.

The Panthers were unable to get any closer as the final minutes bled from the clock.

St. Frances coach Jerome Shelton said that Ferariu was not accounted for properly while his defenders scrambled to get back into position.

“We lost her in transition,” he said. “She got open and she made shots. And Roland Park was well prepared for what we do. They executed their game plan better than we executed our game plan.”

Steinbach said her team regrouped after the early deficit.

“We were doing things that weren’t in our game plan, and we knew that,” she said. “We had to refocus on what we value, and we did a good job of that. Now we have to enjoy this win but refocus immediately for our next game tomorrow night (at St. No. 5 St. Vincent Pallotti).”

Pictured above: Roland Park Country junior guard Rain Green confronts St. Frances guard Aniya Gourdine during the Reds’ 62-46 victory on Tuesday night in a battle for first place in the IAAM A Conference.