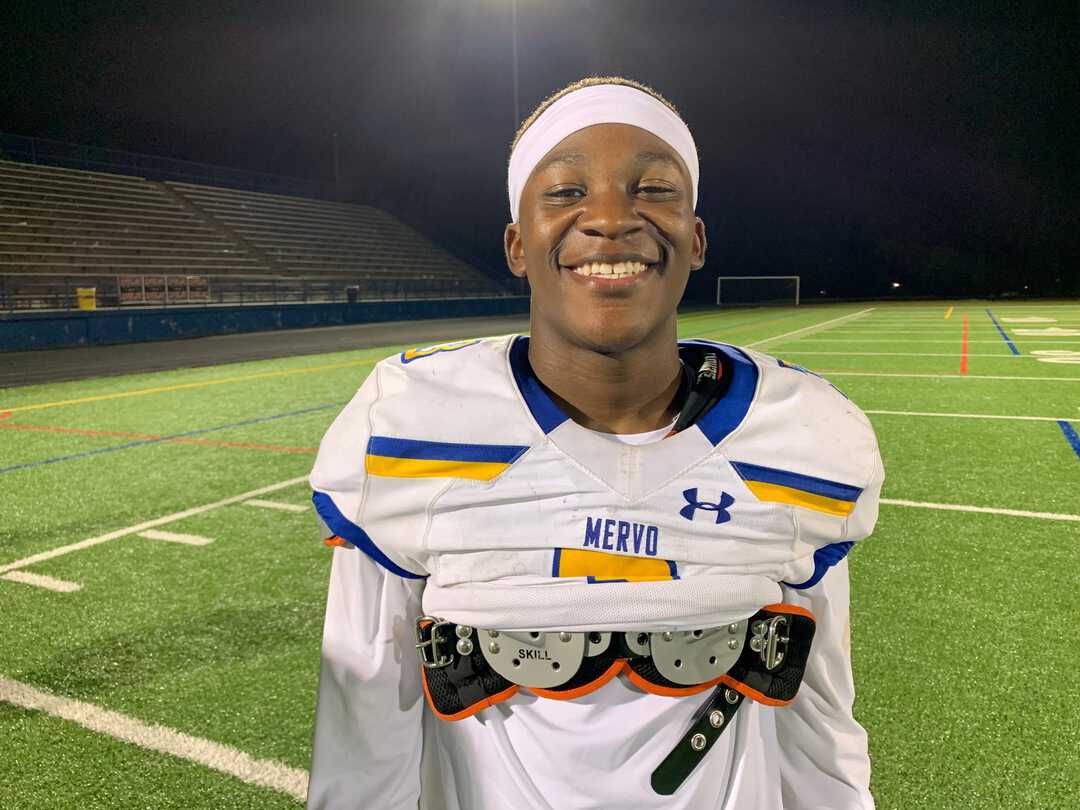 Kelin Kimborough came to life for Mervo in the second half of Friday’s Class 3A state quarterfinal. The senior threw two touchdowns as the fifth-ranked Mustangs defeated No. 14 Westminster, 16-6. to advance to next week’s state semisfinals.

Mervo High football team was in an unusual position for most of its Class 3A state quarterfinal match with Westminster Friday evening. For the first time this season, the Mustangs were held scoreless in the opening half and trailed deep into the second half.

But Mervo’s defense again was resolute, and the Mustangs are headed back to the state semifinals. No. 5 Mervo pushed past 14th-ranked Westminster, 16-6, at Art Modell Field in Baltimore City.

The Baltimore City Division I champ Mustangs will play at Frederick County’s Linganore in a 3A state semifinal Thanksgiving Friday. Last season, Mervo lost to Southern Maryland’s North Point in the 4A semifinals.

After giving up its first points in a month, the Mustangs’ defense kept Westminster out of the end zone, forcing five turnovers.

“It took a lot of grit, a lot of focus, a lot of determination,” said Mervo coach Patrick Nixond. “We set some hard goals this year, and we never dreamed of it ending right here. The guys refused to allow them (Westminster) to celebrate on our field.”

Kimbrough found Tyree Williams for a 30-yard touchdown to give the Mustangs a 7-6 lead with 6 minutes, 46 seconds to go in the third. He launched a 42-yarder into the hands off D’Angelo Woodrum, leading to a 27-yard field goal by Kiran Herman.

“My offense really trusted me in the end. It really came down to instincts in the end,” said Kimborough, who finished 10-of-20. “I told the whole defense, don’t lose no faith, just trust in me, follow me.”

Westminster (9-3), which used Warren field goals of 22 and 31 yards to take a 6-0 halftime lead, was unable to solve Mervo’s defense. Jergensen was 4-of-16 for 38 yards and threw three interceptions while running back Erick Stranko amassed 52 yards rushing on 19 carries.

After starting 0-2, Westminster won its next nine decisions including the Carroll County Athletic League title.

“It was a great ride,” Owls coach Chris Bassler said, reflecting on the season. “We lost our first two games and we really gelled as a team, and went on a nice run and it’s just hard to believe it’s over. We got beat by a very good football team tonight that just made a couple more plays than we did.”

“Everyone played their butts off tonight. We were just a couple of [possessions] short of winning that game,” said Owls junior receiver Austin Bainbridge after the loss. “We just wanted to be more physical than them, beat them in the running game and try to shut down their passing game [because] we know they got a good quarterback. We just came up short.”

After losing in the 4A semifinals last season, Mervo will get another chance to advance to its first state final next weekend.

“Our goals are to go down to Navy Stadium,” said Nixon.