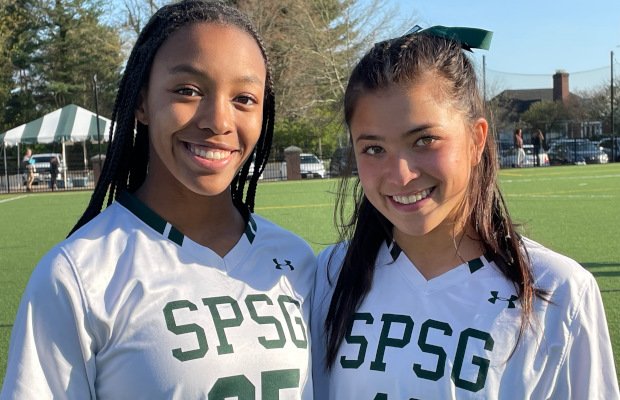 St. Paul’s midfielder Lauren Steer (right) and defender Madison Beal played key roles in helping the No. 1 Gators remain undefeated with a 13-11 victory over No. 3 Archbishop Spalding Wednesday. Steer scored four goals and Beale led a defensive unit that allowed the Cavaliers just two goals in the first 20 minutes of the second half.

The Cavaliers won most of the early draws and used a variety of attack strategies to take a two-goal lead into halftime before the undefeated Gators turned the game around in the second half en route to a 13-11 victory in an IAAM A Conference contest on Senior Day at St. Paul’s. 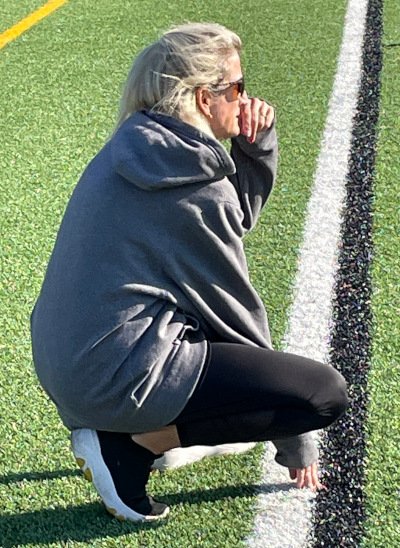 St. Paul’s coach Mary Gagnon, VSN’s 2021 Girls Lacrosse Coach of the Year, has her Gators sitting undefeated atop the IAAM A Conference standings with just three regular season games left. The Gators, ranked No. 1 in the country, defeated Archbishop Spalding, the nation’s No. 8 team, Wednesday, 13-11.

Lauren Steer led the Gators’ attack with four goals while Natalie Shurtleff, Kendall Steer and Anna Regan added two each and Frannie Hahn had four assists in a nine-goal second half.

With just three regular-season games left before the IAAM A Conference tournament begins, the defending champion Gators proved they’re still the team to beat as they retain their grip on the No. 1 ranking in the Nike/USA Lacrosse High School Girls National Top 25.

“We want teams to test us, because down the stretch, we’re going to have hard games,” Steer said. “It’s going to be close. It’s never going to be so easy, so it’s good to have games like this where it’s close and we have to pick ourselves up, where if they go on a run, we need to respond.”

The Cavaliers (9-2, 7-2 IAAM A) are ranked No. 8 in the nation and had previously lost only to No. 2 McDonogh School, so it was no surprise that they would pressure the Gators.

Spalding dominated possession in the first half and took their first lead, 3-2, on Maeve Cavanaugh’s free-position goal with 10:08 left. They would score three more times in the half. Gabby Greene outran a double team while the Cavaliers were man down to give them a 6-4 edge at the break.

In the second half, the Gators started winning more draws and putting together runs of two, three and four goals.

“They’re extremely disciplined,” Spalding coach Tara Shea said. “They’re one of the most disciplined high school teams I’ve seen. They did win a couple draws in a row and they capitalized off that, but that’s this game. I wouldn’t necessarily say one specific thing (turned it around), but they played a nice, hard game which we knew. They’re the No. 1 team in the country. We were prepared for them to play hard.”

The Gators won 11-of-15 second-half draws with Regan drawing the ball to herself four times and Shurtleff controlling three draws on the circle. Although they scored quickly off several of those draw controls, the defense also came up big to spark the initial three-goal run of the half.

St. Paul’s goalie Susan Radebaugh, who finished with five saves, made a terrific stop against Spalding’s first shot of the half and shortly after, Kendall Steer cut the lead to 6-5.

Kendall Steer won the next draw but the Gators turned it over in the 8-meter arc. The defense got it back, forcing a 90-second shot clock violation on the Cavaliers and Hahn hit Regan on a nice cut through the middle for the tying goal.

Another Spalding turnover led to the go-ahead goal, Lauren Steer’s leaping shot over Cavalier’s goalie Colleen Berardino for the 7-6 advantage with 18:07.

The Cavaliers tied it about 20 seconds later on Dowgiallo’s goal, but about 30 seconds after that, Hahn again found Regan, this time racing down the middle uncovered to take the lead for good, 8-7.

Another Spalding turnover, thanks to Cait Gross’s check, turned into a Lauren Steer goal for a 9-7 edge with 11:38 to go. Seven minutes later, the Gators had their biggest lead of the game after Karina Herrera’s goal gave them a 13-8 lead.

“I think we finally got into our offense and our plays and ran them all the way through,” said Hahn. “Instead of doing what the first option was, we looked for the great look instead of the first forced look and I think that really calmed us down as a whole unit.”

On defense, the Gators suffered two major injuries in recent games, sidelining Olivia Rose and Kira Balis, but Julia Lee and Grace Schlossberg started for the first time Wednesday and the unit didn’t miss a step with teammates Madison Beale and Kendall Lally.

The Cavaliers, who got four goals from Greene, showed they can battle with the best and that bodes well for them as the tournament approaches.

“I just loved the fight of this team,” Shea said. “They fight together and they want to win together. I think it’s not every year that you find a team that wants so badly to win that when they step on the field, every ball’s theirs. I think they proved today that really they can and will play with whoever’s stepping on the field with them. I’m really proud and that’s a little bit unique to say in a loss, but there was so much we gained from today.”