Second half shooting spree propels No. 6 Boys’ Latin past No. 11 Loyola 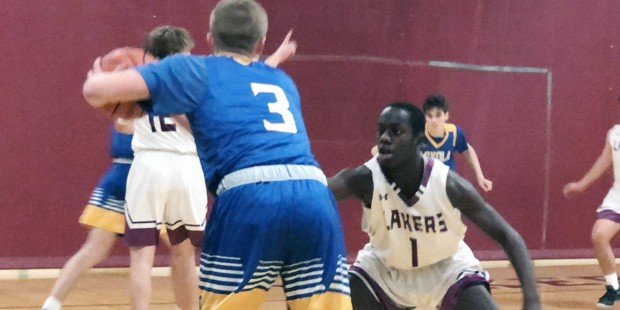 Lakers finish with 14 three-pointers, turning a two=point halftime lead into a 20-point victory 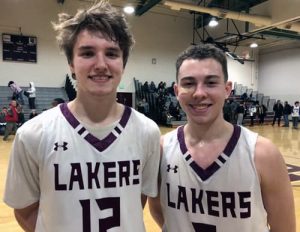 The Camerons! Cam Spencer (left) and Cameron Watts combined for 45 points with Spencer scoring 24 of his game-high 27 points in the second half.

Senior Cameron Spencer ignited the Boys’ Latin offense in the second half, when he exploded for 24 points, to propel the host Lakers to a 70-50 MIAA A Conference basketball win over Loyola Blakefield, in Roland Park on Monday night.

The Lakers (17-3, 3-0 MIAA Black Division) held a slim 23-21 lead over the Dons (11-8, 5-3 MIAA Red Division), at the half, as the Lakers struggled with their outside shooting. Spencer, however, took over in the third quarter when he poured in 14 points to thrust Lakers to a 48-32 lead. Coach Cliff Rees’ team never looked back.

Despite a cold shooting first half, Rees said that he remained confident at halftime.

“With this group I never overly panic,” said Rees. “They know each other so well. They make the adjustments that they have to make.”

On Spencers’ performance, Rees said, “We expect that from Cam. He is a great shooter and a great competitor. When he got us going with that third quarter, it opened things up for things up for our other shooters.”

“We new coming in that they couldn’t stay in front of us,” said Watts. ‘Cam (Spencer) was setting me up and we were setting up our other shooters. We communicate, and everyone plays hard, tough-nosed defense”.

Brendan Fox hit three 3’s for Loyola in the second quarter to give the Dons a 20-17 lead with a little over two minutes to go in the first half, but the Lakers pulled away when Spencer got hot at the start of the second half.

Pictured above: Loyola’s Conner Hepting (#3) looks to make a move against the defense of BL junior Kendall Walker.