No. 5 City drops Woodlawn for showdown with Poly in 3A North boys hoops; Harrison and Obiajulu combine for 30 (VIDEO HERE!) 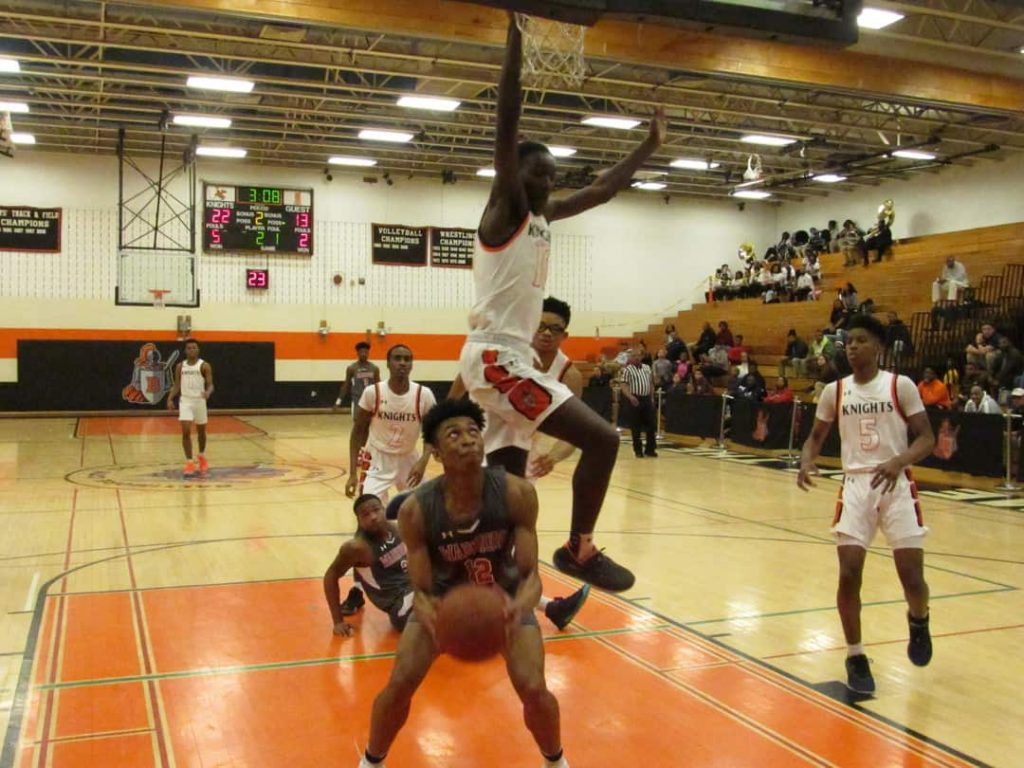 City College’s Mike Cuthrell is airborne as he defends against Woodlawn’s Jordan Allen during the first half of Tuesday’s Class 3A North Region I boys basketball semifinal. The fifth-ranked Knights advanced to the region final with a 75-58 victory over the No. 13 Warriors in Baltimore City.

For City College High boys basketball team to get a rematch with rival Poly in the Class 3A North Region playoffs, the Knights had to get through a second go-around with Woodlawn Tuesday.

No. 5 City put together a solid effort on both ends, posting a 75-58 victory over the 13th-ranked Warriors in a North Region I semifinal in Northeast Baltimore. Junior guard Ahmad Harrison netted a team-high 16 points, and forward Clarence Obiajulu contributed with 14 points and five rebounds for the Knights (22-2 overall).

During the Christmas break, City posted a 57-48 victory over Woodlawn at the inaugural St. Frances Holiday Mixer. The Knights didn’t have 6-foot-8 junior post Kevin Kalu because of the flu, Harrison got into early foul trouble and senior guard Dominic Carrington was playing his first game after an ankle injury.

“We talked about those things, we went back and revisited the game, even watched some film,” City coach Omarr Smith said. “So we knew we had some advantages. We just wanted to play fast, and play to our advantage and get a good win.”

“We knew coming in we had to match their (Woodlawn’s) intensity because they’re a physical team,” Harrison said. “We knew if we (played) more physical, we were going to win.”

Knights forward/center Clarence Obiajulu began the game with seven quick points to help City sprint out to an 11-2 lead early in the first quarter. They led 17-10 after one, then outscored the visitors from Baltimore County, 15-7, in the second quarter for a 32-17 halftime advantage.

The Knights maintained the advantage, dominating the glass and capitalizing off Woodlawn’s miscues in transition. Their guards constantly attacked the rim to either draw fouls or dump the ball inside for easy buckets.

“We always use the term…swing first. Let’s not wait to see what’s gonna happen, let’s dictate,” Smith said. “I thought we did that, we got out in transition. I was very pleased with our defense, especially in the first half.”

“We waited too late to ignite. Their size really bothered us today I thought in the first half, both offensively and defensively,” Richardson said. “We don’t have any bigs. We do what we do off of hustle, effort, defense and being on a string together.”

The Warriors ran off 13 straight wins before losing to New Town and City.

“We always overachieve,” said Richardson. “We weren’t ranked early or projected to do this well so what we’ve done is a phenomenal for what we have.”

City will get a second shot at Poly (21-2), which rolled to its third city championship in five seasons. The Knights gave the nationally-ranked and three-time reigning 3A state champ Engineers their closest battle in city league play – a 77-69 decision on The Alameda last month.

The Knights haven’t defeated their Cold Spring Lane rivals since their 27-0 Class 3A state title 2013-14 season.

“We can’t make many mistakes against them. Easier said than done but you gotta try to slow them down, especially from the beginning,” Smith said. “We’ll go back to the film. We know the things we did wrong…we missed some assignments. So for us to make as many mistakes as we did and lose by a slim margin we’re pretty optimistic going in.

We got to go in looking for a fight.”

CLASS 3A NORTH REGION I SEMIFINAL