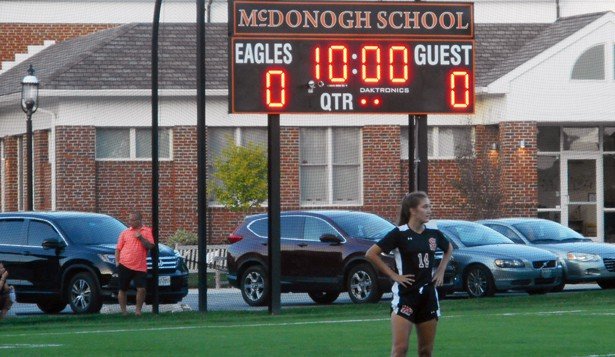 Top-ranked Spalding, No. 2 McDonogh deadlocked atop IAAM A Conference

After nearly scoring in the first minute and then coming dangerously close to finding the net in the final seconds of the second overtime — not to mention several times in between — Tuesday afternoon, the second-ranked McDonogh girls soccer team walked off its home pitch no worse than when it stepped on the well-maintained grass field in Owings Mills some two hours earlier.

Yet there was a bit of a frustration factor for the Eagles, who seemingly had the momentum to put some distance between themselves and No. 1 Archbishop Spalding in a showdown for the top spot in the Interscholastic Athletic Association of Maryland A Conference standings if they could have only notched one goal.

Instead, 100 minutes of fine play between two outstanding teams resulted in a 0-0 deadlock.

The reason was simple: Spalding junior goalie Jill Savageau and defensive mates Jessica Wallace, Ella Bjorn, Hannah Williams and Kaitlyn Keaton were the embodiment of a backline that bent without breaking.

“The defense was amazing,” Savageau said. “Everyone stepped up. It was an 11-player game. We were noticing their shift and movement. I was trying to be able to predict their runs that were going into the box while trying to help the defense to keep calm and not panic.”

“They were pretty fast in the back and they bodied us off the ball easily,” she said.

Dorsey intimated that the Eagles (5-1-2, 1-0-1 conference) could have been more cohesive on their attacking runs.

“I thought our best 10 minutes were in the first overtime, when we played with more tenacity and grit,” she added. “We started out strong early in the game and were connecting pretty well, and then we changed our game plan and stopped doing it.”

Savageau racked up a whopping 18 save in the match, several of which were of the phenomenal variety.

One of those came in the first extra period when the Cavalier keeper was barely able to snag a lofting 30-yard shot by sophomore forward Kalli Wethern.

In regulation, Savageau came up with a couple of other gems as well, most notably in the first minute when the speedy Dorsey rocketed past the defense only to be denied.

Savageau then turned away freshman Kemper Robinson’s 16-yard blast in the 13th minute.

Her most acrobatic stop in the 53rd minute was also against Robinson when her well-struck ball from 14 yards seemed destined for the corner of the net until a diving Savageau deflected it out of bounds at the very last instant.

Meanwhile, McDonogh’s defense was also up to the task with junior goalie Abby VanMetre making 12 keys saves, including a stellar one on junior midfielder Abby Hanks midway through the second half and another on junior Jess Zimmerman with just over five minutes left in the final OT.

Still, the home team created more opportunities to score as evidenced by earning 13 corners to just one for the Cavaliers (5-0-2, 2-0-1). The Eagles also outshot the Cavs, 22-13, boasting a sizable statistical superiority.

Yet the numbers did not add up for McDonogh.

“I thought we played well until we got into the attacking third,” McDonogh coach Harry Canellakis said. “Saying that, we created a lot of chances and on another day could have won, two or three to nothing. But maybe that’s a little unfair to Spalding, because I thought they played great.”