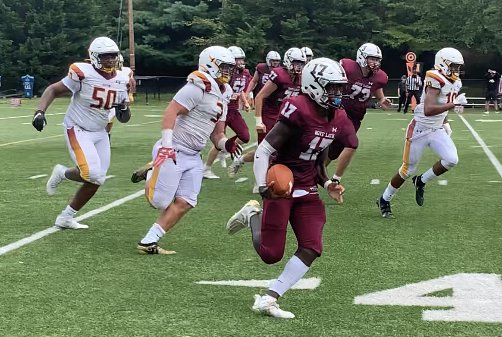 Boys’ Latin quarterback Kaden Lymon (17) turns the corner against Bishop Ireton, on Saturday afternoon. The senior ran for a touchdown and threw for another score as the Lakers opened their 2021 slate with a 21-12 victory over the Eagles from Northern Virginia.

by Nelson Coffin
It was a baptism of fire — or at least a copious amount of heat and humidity — for the Boys’ Latin School and Bishop Ireton (VA) football teams Saturday afternoon at steamy J. Duncan Smith Field.
While both squads weathered the conditions, the Lakers were able to overcome the Cardinals’ big-play offense to rally for a 21-12 victory in a non-conference battle.
Stung twice by mid-range passes from Bishop Ireton junior quarterback Jamie Kaiser to classmate Reid Burke, who turned them into long touchdowns of 57 and 76 yards, the Lakers yielded only one other chunk play — a 65-yard bomb from Kaiser to senior wideout Joseph Johnson early in the third quarter.
Even better for the home team was the fact that after Johnson was knocked out at the BL 5-yard line, the Lakers’ defense stiffened behind senior defensive ends Gavin Proutt and Owen Holder.
Holder had a tackle for a 2-yard loss on second down and pressured Kaiser to toss the ball away on the next play.
On fourth-and-goal, Kaiser was closing in on the goal line when Proutt stuck him hard to force a fumble that trickled out of the end zone, ending the drive and preserving a 14-6 BL advantage, built on a 3-yard TD run by junior running back Damon Malloy and a 16-yard scoring strike from senior quarterback Kaden Lymon to junior wideout Tyler Owings in the second period.
“We thought we had the right plays called,” Bishop Ireton coach Gary Wortham, Sr. said. “We just couldn’t punch it in. They have a really good defense.”
After Kaiser and Burke burned the Lakers for a second score on the Cardinals’ next possession, BL still remained on top because of the goal-line stand.
The 6-foot, 185-pound Proutt said that the Lakers used a “Bear” defense to thwart the Cardinals.
“The linebackers pushed up, and the ends got on the outside shoulder of their guards,” said Proutt, who wrestles and is a long stick defender on the BL’s reigning MIAA A Conference lacrosse team. “The linebackers filled the gaps well. We had watched a lot of film of them. That really set the tone for us.” 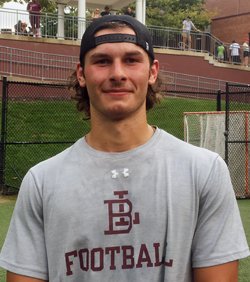 BL senior defensive end Gavin Proutt forced a fumble on a goal-line stand to help the Lakers preserve a 14-6 lead against Bishop Ireton, early in the third quarter of the season-opener for both schools.

After giving up that second TD, the Lakers made short work of their next possession when senior Nathan Crouse returned the ensuing kickoff into plus territory at the Bishop Ireton 46-yard line.
That’s when BL’s hurry-up offense, adroitly directed by Lymon, took only seven plays to pad the lead.
Lyon and junior running back Seth Taylor sledgehammered the Cardinals into submission with Lymon dancing into the end zone after a 10-yard scamper with just over four minutes remaining in the third quarter.
BL coach Ritchie Schell, who began his 21st season at the Lakers helm, praised assistant coach Tony Rinaudo for implementing the hurry-up.
Rinaudo said that his system is designed on feeding plays to his players quickly.
“We use a lot of buzz words to keep the plays short,” said Rinaudo, a former assistant to Donald Davis at Calvert Hall. “We ran 70 plays today. We go fast when the other team is tired, and you could tell they were getting tired. And Kaden is a great senior leader. (The hurry-up) is a perfect fit for him. The shoe fits.”
Schell also had good things to say about Proutt’s four-sack game.
“He’s a tough, strong kid and a great kid,” the coach said. “He a great defensive player who always does what you ask him to do.”
Junior Nicky Brown, a varsity soccer player whose strong punting helped the Lakers into advantageous field position after arriving late for the contest because he was taking the SAT’s, kicked the point-after to boost the lead to 21-12.