Saving the best for last 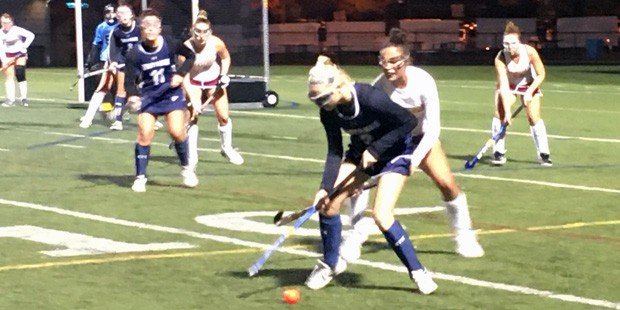 Tolle turns away shot in sudden-death shootout to send No. 19 Marriotts Ridge over seventh ranked Hereford; Gladstein scores once in regulation and twice in shootout for Mustangs

It’s up for statisticians to decide if saves in a field hockey shootout count toward seasonal totals.

Yet everyone can agree that saves in the shootout phase are invaluable.

Thursday night in the nightcap of a Class 2A state semifinal doubleheader at Broadneck High School in rainy Cape St. Claire, Marriotts Ridge goalie Grace Tolle proved as much when her save in the sudden-death one-on-one battle catapulted the Mustangs (11-4-1) to a berth in the state championship game against Oakdale on Saturday at Washington College in Chestertown. 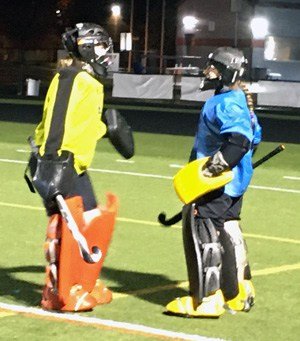 Marriotts Ridge goalie Grace Tolle (left) chats amiably with her Hereford counterpart and fellow senior Sara Hallameyer before a shootout in the Class 2A state semifinal won by the Mustangs.

Tolle and her Hereford counterpart, Sara Hallameyer, were both brilliant in the shootout with Tolle prevailing by the slimmest of margins.

Both goalies held firm in the best-of-five first shootout, only allowing goals to the Marriotts Ridge tandem of seniors Emma Gladstein and Sidney Parkent while seniors Chloe Parker and Sydney Powell found the cage for the Bulls (13-3).

With the shootout tied, 2-2, it went to the sudden-death phase.

Gladstein nailed her chance with a similar authority to what Tolle did in turning away Hereford’s bid for the equalizer that would have earned a second sudden-death round.

Instead, it prompted a wet and wild celebration as the Mustangs mobbed their senior goalie after her heroics.

Only minutes earlier, before the shootout, Tolle and Hallameyer stood and talked as if they were old friends as they waited for the competition to commence.

“I had never met her,” Tolle said. “But we just talked about our club teams. I mean, we both had respect for each other.”

Tolle said her mindset in the shootout was to “focus on the ball” to keep it out of the cage.

“It’s high school sports,” Tolle said about how she appeared to be so relaxed. “It’s supposed to be fun.”

Marriotts Ridge coach Stacie Gado said that she had plenty of confidence in Tolle’s ability to succeed under pressure.

“She an athlete,” Gado said. “She’s a competitor.”

Nor did Gado hesitate when it came to choosing the first player to face Hallameyer in the sudden-death situation.

“Emma is our strongest and most skilled player,” she said about the Delaware commit, who has 13 goals and five assists after she converted a feed from senior forward Kayla Brusco to give Marriotts Ridge a 1-0 advantage with 20 minutes left in regulation.

The Baltimore County champs, who were denied a chance to reach the state final for the eighth consecutive year, knotted the score with just over eight minutes to go in the second half on a goal by junior attacker Molly Daw assisted by Parker.

Neither team could break through in either of the 10-minute overtime periods, although the Mustangs dominated the second extra session by winning the battle of penalty corners, 4-1, while keeping the ball in Hereford’s defensive end for long stretches.

The Bulls played the game without leading scorer Anna Brandt (14 goals, 3 assists this season), who was ill.

Pictured above: Marriotts Ridge sophomore forward Ella Walchko tries to control the ball against a Hereford defender in Thursday’s Class 2A semifinal at Broadneck High School.