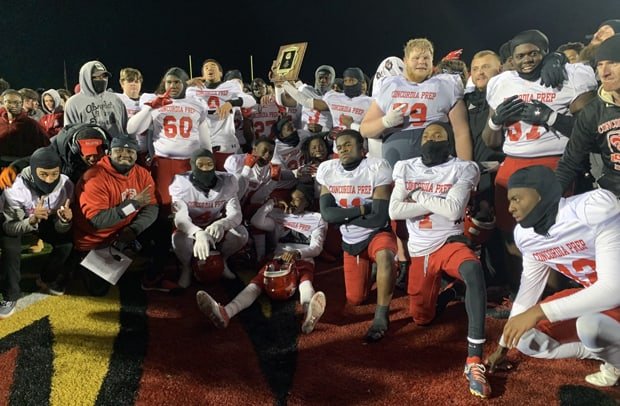 As a recently as five years ago, the idea of Concordia Prep competing on the same football field with a team with the tradition and pedigree of Loyola Blakefield was preposterous.

In fact, the idea may have seemed unlikely just two weeks ago when Loyola drilled the Saints, 41-9, in the regular season finale to secure the top seed for the B Conference playoffs.

Some ideas, however, grow on you.

This one grew in a big way Saturday night, as the Concordia defense turned things around 180-degrees from the first meeting, holding the 16th-ranked Dons without a touchdown and leading the way to a 14-3 victory in the MIAA B Conference football championship game, played at Calvert Hall.

After surrendering a field goal to Loyola on the game’s first drive, a 23-yarder by Conor Becks, the No. 17 Saints shut the Dons out the rest of the night and secured the victory with a pair of second quarter touchdowns.

The Saints (9-2 overall) first touchdown was text book conventional. The second was anything but.

After taking over at the Loyola 42, following a short punt early in the second quarter, the Saints gained 12 yards on a run by quarterback Jordon Brooks, followed by a 30-yard touchdown run, around left end, by junior Josh Derry to grab a 7-3 lead.

After the teams traded a few punts, the Concordia Prep defense forced a fumble from Loyola quarterback Marcus Hines and senior defensive lineman Kogge Metuge pounced on it to return the ball to the Saints at the Loyola 31. Concordia advanced it to the nine in their quest for another touchdown, but had to settle for a 31-yard field goal attempt by Ryder Bentz when the drive reached fourth down.

What happened next went a long way in deciding the outcome of the football game.

Look what I found! Concordia center Brice Davis holds up the football after he picked up a blocked punt, by his own kicker, and returned it 10 yards for a touchdown. (Photo courtesy of John Bowers)

Bentz’s kick was blocked in the center of the Loyola line, but instead of rebounding back toward’s the opposite end zone, the ball skidded forward where no one saw it spinning on the turf near the 10-yard line. No one, except Concordia Prep junior center Bryce Davis, who scooped it up and jogged into the end zone for a dream touchdown.

“My instincts just kicked in,” Davis said. “I decided to pick the ball up and make a big play for the team. Nobody saw it and everybody was asking me on the sideline what happened.”

That play and the excellent job he did anchoring the the Saints offensive line not only helped his team win a championship, it earned Davis recognition as the Ryleigh’s Oyster Baltimore County Bold Player of the Week, a weekly honor awarded by Varsity Sports Network.

Loyola started its next possession near midfield and reached the Concordia 18 before its drive stalled in the final minute of the second quarter. The Dons attempted a 37-yard field goal by Becks, but it fell short and Concordia Prep took its 14-3 lead to the half.

Loyola forced a quick Concordia punt at the start of the second half and appeared to have something going when it picked up a first down at the Saints’ 46. On a neatly designed play, tackle Chris Logue reported as eligible and went down field unnoticed where Hines found him for a 34-yard reception. During the tackle, however, Trekis Mcolough separated Logue from the ball and it was recovered by by Concordia’s Everette Dingle, Jr., who returned it 12 yards.

The Dons (8-3) averted another disaster when they were forced to punt on their next possession and the long snap cleared Beck’s head and rolled all the way to the Loyola one-yard line. Becks, however, ran it down, side-stepped one would be tackler and did an excellent job to kick it back out near midfield.

Concordia did not get any points out of the ensuing drive, but did eat nearly four minutes of clock, as Dingle moved into the wildcat quarterback position and helped the Saints move the game into the fourth quarter.

The Dons got the ball back with 11:02 to play, still trailing by two scores and after two incompletions, got a spark with a 38-yard pass from Hines to Jayden Moore. A 12-yard reception by Noah Bull and pair of runs by Micah Robinson gave the Dons a first and goal at the Saints six. A false start on first down helped stall the drive and the Dons’ looked to get back within one score when they sent Becks out for a 28-yard field goal attempt.

Dingle, however spoiled those plans when he burst up the middle and blocked the kick to all but seal the victory.

“There has been a four-year build up for this, from my freshman year, going to the (C Conference) championship,” said Dingle.

He also explained, in part, what went into the turnaround against the Dons from just a couple of weeks ago.

“We just studied film,” Dingle explained. “We knew we were going to see them again, so we studied film extra hard, after practice and sometimes even during school hours. I was prepared for this game, knowing what they were going to do. It was all about execution.”

Joe Battaglia, the Saints’ second-year head coach, said the turnaround from the first meeting was less about changes and more about making less mistakes.

“It was not a lot of adjustments, honestly,” said Battaglia. “A lot of what we did in the first game was self inflicted. We had a lot of mistakes. They took advantage of those mistakes and we made sure we were going to make less mistakes today.

“That’s one heck of a football team we just played. I am so proud of our guys and our staff. Everybody believes. The kids believed. Our coaches believed.”

“Everything we normally have success doing, worked against us today,” said Zehyoue. “We had two (kicks) blocked. We blocked a field goal and they scored a touchdown. We actually moved the ball pretty well. We actually had a decent amount yardage, but turnovers and missed opportunities are really what this came down to.”

Zehyoue’s Dons have little time to lament the loss. They will immediately turn their thoughts to preparing for the renewal of their Turkey Bowl battle with Calvert Hall, which will be played on Thursday morning at Towson University’s Johnny Unitas Stadium. Calvert Hall won the MIAA A Conference championship game on Saturday afternoon, defeating McDonogh, 14-8.

Concordia, then known as Baltimore Luthern began its football program in 2002 and won just three games over its first five seasons while losing 35, competing in the MIAA C Conference.

During that same time frame Loyola won two MIAA A Conference titles and would go on to win two more, before beginning a down turn that would eventually lead them to leave the A Conference in 2018 and play three seasons as an independent, before moving into the B Conference this fall.

The Saints began to improve in 2014 when the school changed its name to Concordia Prep and by 2018 it reached the MIAA C Conference championship game. In that contest, the Saints squandered a 20-0 halftime lead and fell, 21-20, to Annapolis Area Christian. They moved to the B Conference the following fall before their head coach Josh Ward left the program in 2019 to take the head coaching job at Calvert Hall, his alma mater.

The players who were freshman on the team that fell in the 2018 C Conference title game are now seniors on the 2021 MIAA B Conference championship squad.

Pictured above: Surrounded by his teammates, Concordia Prep’s Everette Dingle, Jr. displays the MIAA B Conference football championship plaque which will find a home at the Towson school. It is the first ever title in football for Concordia Prep.