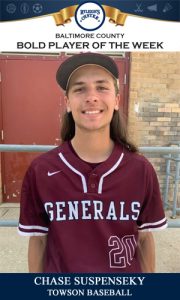 If the pressure of the 3A state baseball tournament were not enough, Towson High senior left-handed pitcher Chase Supensky had to deal with near 100-degree heat on Saturday, May 21st as he faced a talented lineup from Montgomery County’s Rockville High School.

His teammates supplied with him with a just single run, scored in the bottom of the fourth inning, and Supensky carried them into the state semifinals with a 1-0, two-hit, complete game shutout performance. He struck out seven batters and walked just one. He also navigated out of minor jams in both the third and fourth innings when Rockville got their only two runners as far as second base.

Towson now returns to the state semifinals for the first time since 2018 and is two wins away from its first state championship in baseball since 2000.