Each week of the high school sports calendar, Ryleigh’s Oyster will honor one Baltimore County student-athlete, from an athletic event covered by Varsity Sports Network, as its Baltimore County Bold Player of the Week. Each winner will receive a special placard to commemorate their achievement, as well as special T-Shirt and invitation to be honored at Ryleigh’s Oyster in Hunt Valley. 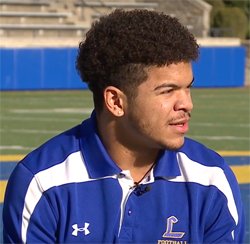 Loyola senior quarterback Marcus Hines had a sensational Turkey Bowl, leading the Dons to a 41-35 upset of MIAA A Conference champion Calvert Hall in the annual Thanksgiving contest. Hines rushed for two touchdowns, caught a TD pass and threw the game winning touchdown pass in the game’s final minute.

Bryce, the starting center for the Concordia Prep football team, not only anchored an offensive line which led the way for the Saints offense in their victory over Loyola Blakefield in the MIAA B Conference Championship Game, he made a game clinching play. After Loyola blocked a second half field goal attempt by Concordia, Davis alertly scooped up the football and ran 10 yards for a touchdown, clinching the Saints 14-3 victory and their first ever football championship.

A senior setter, Charlie was in the center of the action throughout as the Dulaney volleyball team swept Perry Hall in three sets to win the 4A North Region I final, earning her this week’s honor as the Ryleigh’s Oyster Baltimore County Bold Performer of the Week. She had 22 assists in the victory.

Deon earns the distinction of being the first football player to be named the Ryleigh’s Oyster Bold Performer of the Week. He earned the honor for scoring a pair of touchdowns – one on a 71-yard punt return and the other on a reception – to help Mount Carmel defeat St. John’s Catholic Prep, 52-0, on Oct. 31st at Loyola Blakefield, clinching the 2021 MIAA C Conference championship for the Cougars.

Only a sophomore, Hereford’s Riley Hackett came through like a senior on the season’s biggest stage, as she converted a penalty stroke, after being fouled in the 5th round of a 1-v-1 shootout which lifted her team to a victory over arch-rival Dulaney in the 2021 the Baltimore County field hockey championship game. The goal not only earned her a title, she was also recognized as the Ryleigh’s Oyster Baltimore County Bold Performer of the Week.

Rich scored two goals in an impressive 4-0 road win by the second-ranked Cardinals in a MIAA A Conference match with then No. 8 Concordia Prep. Rich also scored a goal earlier in the week as Calvert Hall routed St. Paul’s to wrap up a top two seed in the A Conference which comes with a first round playoff bye and homefield advantage for the semifinals.

Ella scored three goals in her team’s pivotal 5-1 win over previously unbeaten Bryn Mawr, on Aug. 14th, to give the Grizzlies sole possession of first place in the IAAM A Conference field hockey standings. She also made history as the first ever winner of the Ryleigh’s Oyster Baltimore County Bold Performer of the Week award.