Kyle Keeney (67) and Linganore smothered No. 17 Chesapeake-Anne Arundel in the Class 3A state football semifinals Friday evening. The defending state champs from Frederick ended the Cougars’ season with a 45-6 decision.

It was a tough night in Frederick for two Baltimore metro football teams, as Elkton High and Chesapeake-Anne Arundel each saw their 2018 football season end in similar demises in their respective state football semifinals Friday night.

At Linganore, No. 18 Chesapeake got a first down on its initial possession, but was steamrolled from that point on. The Cougars trailed 45-0 at the half of their Class 3A state semi, and eventually fell 45-6 with the entire second half being played under a running clock.

The host Lancers (12-1 overall) drove 91-yards for the their first score which came on a 13-yard run by Joey Bruschia. On its next possession, Bruschia capped a 61-yard drive with his second TD run; this time from 11 yards.

A blocked punt led a 13-yard TD run by Linganore’s Joey Felton and the Lancers led 20-0 at the end of one quarter.

In the second quarter, Linganore added a 32-yard TD catch by Felton, from Ryan Leyh, a 39-yard touchdown run by Davon Butler and a 1-yard TD plunge by Jackson Ambush. In addition, Bennett Formulak nailed a 25-yard field goal as time expired.

Chesapeake (10-3), in their first state semifinal, finally got on the board with 5:30 to play in the final quarter with a 13-yard touchdown pass from Tyler Clark to Alonzo Wilkes.

Linganore advances to its second straight state final where it will face Franklin, which took out Huntingtown of Calvert County, 21-10, in the other 3A semifinal Friday. The Lancers and Indians meet on Thursday, Nov. 29 at 7 p.m. at Navy-Marine Corps Memorial Stadium in Annapolis for the state championship.

The Lancers will be looking to defend the title they won against Milford Mill Academy last year and their seventh overall. Franklin has won two previous titles with the most recent in 2014. The Indians were runners-up in 2016.

In a 2A semifinal, Elkton suffered a similar fate in a 38-0 loss to Oakdale, but the Elks were able to keep the running clock at bay until the third quarter. 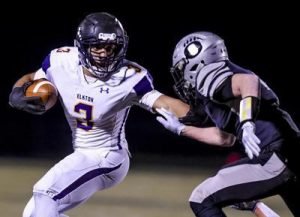 Elkton running back Tayshawn Watters wasn’t able to find much running room against Oakdale in a 2A state semifinal Friday evening in Frederick. The No. 20 Elks were drubbed by the undefeated Bears, 38-0.

The Bears’ first score was setup by a Dylan Barney interception, leading to an 8-yard touchdown pass from Collin Schlee to Simeon Sabvute, giving Oakdale (12-0) a 7-0 lead midway through the opening quarter. The hosts struck with a 65-yard halfback option pass from Gattett Witt to Blake Baxter for a 14-0 advantage.

The running clock was turned on when Schlee, a Kent State University commit, and Miller connected once again, this time for a 28-yard score and a 38-0 Oakdale lead.

Oakdale advances to the 2A state championship game against undefeated and No. 6 Glenelg which hammered 16th-ranked New Town, 35-0, in the other semifinal.