Franklin’s Clinton Stewart (14) tries to elude a Towson defender after making a catch in the second half of Saturday’s football contest. The Indians defeated the Generals, 43-8, in Baltimore County.

After his team’s victory Saturday afternoon, Franklin High football coach Anthony Burgos had to do a quick refresher on the huddle breakout after the team did it incorrectly.

It was the only hiccup for the Indians, who made a successful return to the gridiron with a 47-8 decision over Towson. Senior quarterback Kameron Howard scored two touchdowns and Mehki Workman had a 78-yard punt return score and an interception.

The perennial Baltimore County powerhouse put up three touchdowns in the first nine minutes en route to a running clock in the second half. It was the first game for Franklin since Nov. 22, 2019 when its campaign ended on a frigid night at Montgomery County’s Damascus in the Class 3A state quarterfinals.

Exactly a week from the official start of spring, the Indians were happy to be playing after months of uncertainty because of the Covid-19 pandemic.

“This has affected everybody in so many different ways. We couldn’t had fathomed this,” said Burgos. “Think about the freshmen who haven’t been to start in-person school or the seniors who had to miss the traditional season. I’m just thankful to be out here.”

“The whole team has been waiting a long time. We’re just blessed to be out here playing again,” senior offensive linemen Brandon Carr. “It was mentally tough on all of us, but we can only control what we can control.”

Baltimore and Howard county public schools kicked off shortened campaigns this weekend. Baltimore County will have a five week “spring” season while Howard has a four-week season.

It was a successful return for Franklin football seniors Kameron Howard (left) and Brandon Carr Saturday. The Indians take on Hereford Friday evening.

Burgos plans to use the coming weeks to lay the groundwork for, hopefully, a normal fall season, while celebrating the seniors.

“We want to make sure the guys coming after us are on the right track,” said Howard.

Howard scored on a short runs of one- and three-yards. Junior Rodney Nelson and senior Anthony Morante added long runs of 52 and 45 yards, respectively, and Jaimon Wehye had a five-yard score.

Junior backup quarterback Quinten Demry threw a nine-yard score to Malik Benson. The Indians, who host Hereford Friday, scored all their points in the opening 24 minutes.

“We’re just trying to get guys in different spots and have them run around a little bit especially after being quarantined, virtual school and no practices,” said Bryant, whose team plays rival Dulaney Saturday afternoon. “I’m really proud of how my guys played and competed because it could’ve gone the other way at halftime. We played til the final whistle.“ 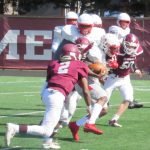 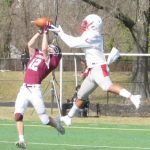 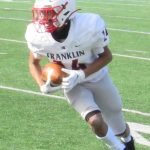