It was an unexpected end of the road for Westminster volleyball seniors Emily Stauder (left), Jilienne Widener and Kasey Thomas Thursday evening. The No. 1 Owls dropped their first match of the season in a 4-set loss to Calvert County’s Northern in the Class 3A state semifinals at the University of Maryland.

The timing could not have been worse for Westminster’s Jilienne Widener.

A week before the state volleyball semifinals, the Baltimore area’s best power hitter “tweaked” her knee in practice. She said she didn’t know exactly what happened to the knee. It hurt, but she was still able to play.

In Thursday night’s Class 3A state semifinal match, however, she exacerbated the injury, leaving her unable to generate the kind of power the three-time Carroll County Player of the Year’s known for.

“I definitely couldn’t do what I normally do and it was so frustrating,” the senior said.

Widener had 16 kills and her teammates picked up some of the slack for 28 more kills, but the loss of her power late in the match combined with a balanced Calvert County’s Northern team brought the No. 1 Owls’ quest for their first state championship to an early end in a 26-24, 23-25, 25-11, 25-20 loss at Ritchie Coliseum in College Park.

The Patriots (20-0 overall) will meet Magruder for the championship Saturday at 7:30 p.m. at Ritchie Coliseum. Magruder from Montgomery County ended No. 5 Bel Air’s season with a sweep in the other 3A final four match in College Park.

For Westminster (17-1), the match started strong as they split the first two sets. Widener managed to pound out most of her kills in those two sets. In the third, she was in more pain after chasing a deep ball almost to the wall. After that, she struggled to pivot and get off the ground to hit the ball.

Still, she never left the court.

“I was going down fighting,” said Widener, who led the Owls to the state title game two years ago and to the semifinals last season.

That was fine with Westminster coach Evan Frock.

While Widener’s injury certainly had an effect on the Owls’ game, so did Northern’s all-around game. Middle hitter Allie Droneberger had 20 kills and outside Allie Timbario had 15. The Patriots (20-0) had just 16 attacking errors while the Owls had 34.

“They have a big front row that can get a block up and scrappy defenders behind them and that’s a recipe for a great defense. It’s probably one of the best teams we played this year,” said Frock, adding that his team was prepared.

The Patriots, who beat the Owls for the 2017 championship, will go after their 12th state title Saturday, but coach Bobby Gibbons said they had to play well to beat Westminster.

“That’s a hell of a team.” Gibbons said. “They’ve got a lot of good hitters on that team, they’re well coached and they’ve been to this tournament three years in a row. They understand what it takes to win and for us to come out and get a win over a team like that is really impressive.”

For the Owls’ four seniors who had hoped to polish off their careers with that elusive state title, the season will be remembered as much more than the final match.

“It’s been awesome,” Stauder said. “Me coming back from an injury, coming right into this and having the intensity right away, it was like this could be our year. Pushing each other in practice — I know some of us came before practice, stayed after practice and putting in all this work, it was fun. It was a good last year.”

The Bobcats managed only a few runs of more than three points and all of them came early in the first set. Magruder had almost all of the momentum for the rest of the match, especially in the third set when they had 13 kills on 15 total attacks without a hitting error.

The Colonels’ 6-foot outside hitters Maya Scott and Kaliyah Moss pounded out 28 of their team’s 39 kills. Scott had 15 on 36 total attacks. Moss had 13 on 25 total attacks with only three errors.

“They passed super well,” Bobcats coach David Simon said. “I don’t think their setter moved much. The balls were always right to her and so she could run whatever she wanted and they’ve got some big guns, so when you pass that well and you can set them up, they terminated. They were a great team.”

For the Bobcats, middle blocker Lexi Couch and opposite McKenna Reiswig had five kills each. Setter Olivia Simon had 14 assists.

“This game did not portray how good a team we are,” said outside hitter Maddie Reagan, who had four kills. “We did not play like we usually do. This is not our best game at all. I think we did push through, but we needed to be smarter with some of the tips on the net. It was tough with the refs calling us (for net violations). We just had to get the ball off the net.”

“I think what made them successful over us is they got momentum and they kept on going. For us it was hard to side out and our serve receive really hurt us tonight. That’s something that hurt us all season… Sometimes you were able to get away with it, but tonight — credit to them, they are a good team — I just wish we could have come out a little differently.”

In the final game, the Colonels, from Montgomery County, had all the momentum. They opened with a seven-point run and finished with an 12-0 run, the final 11 points on Moss’ serve.

To David Simon, who coached his daughter Olivia for the last time, having 10 returning players is a strong foundation for the future.

“There’s still a lot of talent here,” he said, “and a lot of kids are playing club ball and stuff like that, so we continue to get better. We’re excited at Bel Air. We’ve had a good last three years and we believe we can come back here again.” 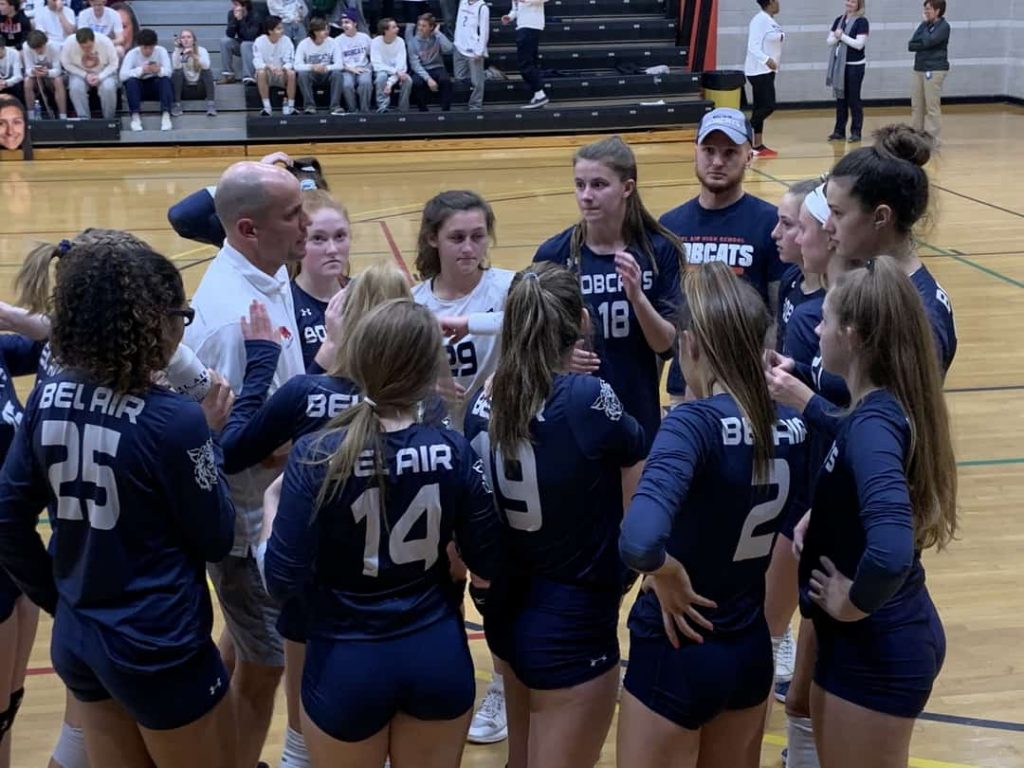 Bel Air was unable to get into rhythm in Thursday’s 3A state semifinal contest. The No. 5 Bobcats were swept by Montgomery County’s Magruder.