Right-hander Austin Keefer was by no means perfect on the mound for No. 13 North East High against UCBAC Chesapeake Division baseball rival Fallston on Thursday afternoon. 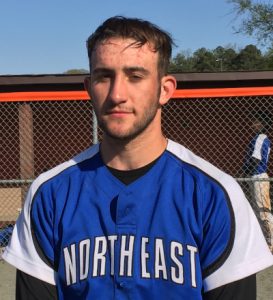 Senior right-hander Austin Keefer scattered five hits, struck out three and walked two in his first complete game of the season in No. 13 North East’s 12-1 win over 15th-ranked Fallston Thursday afternoon in Harford County. The Indians had already sewed up the UCBAC Chesapeake Division before topping the Cougars.

Nevertheless, the senior Hood College commit was very efficient in tossing a complete-game five-hitter in the Indians’ 12-1 six-inning triumph while running his record to 5-0 this spring.

Keefer walked just two in taming the 15th-ranked Cougars, notching his third strikeout of the contest with runners on second and third to wrap up the victory in the sixth inning.

The Indians (16-1 overall, 12-1 Chesapeake), who won its first 13 decisions before falling to Patterson Mill Monday. The Cecil County school rebounded with a victory over Harford Tech, clinching first in the UCBAC Chesapeake.

All in all, Keefer, who also had the game’s only extra-base hit Thursday, faced just an average of four batters per inning.

Keefer said that his route-going performance was due in large part to an assortment of off-speed stuff that kept Fallston from mounting any major threats.

“I was just trying to keep them off-balance,” he said.

The only time the Cougars (10-5, 9-4 UCBAC Chesapeake) were able to scratch out a run against Keefer was in the fourth on singles by junior pitcher Braeden Rock, junior shortstop Jason Foxx and junior DH Finlay Jourdan to cut the North East lead to 3-1.

The score stayed that way until the Indians sent 14 batters to the plate and exploded for nine runs on nine hits in the sixth frame.

Austin Keefer then stroked the game’s only extra-base hit — a double — to drive in two more runs and up the visitors’s advantage to 9-1.

Newton knocked in the 10th run on a grounder to second and Flaugher plated his second and third runs of the inning on a single down the right-field line to push the cushion to cushion to 12-1.

Flaugher also had an RBI sacrifice fly in the second just after Hopkins brought home the game’s first run on a single. 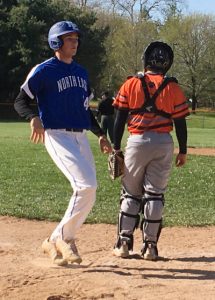 Switch-hitting catcher Ethan Flaugher scored in North East’s nine-run sixth inning. The sophomore singled twice and knocked in three runs during the rally in which the Indians sent 14 hitters to the plate.

Although Fallston is going through what coach Grant Morlock described as “a tough stretch,” the game was still within reach until the fateful sixth.

“We’re slumping at the plate,” Morlock said after his team scored just one run for the second straight game, including a 5-1 loss to unranked North Harford earlier this week. “We’re trying to find ourselves a little bit. But we’ll be allright. We’re still in second place in the league. We were in the game and then they put up that crooked number. That took the wind out of our sails.”

Both Newton and Evan England reached on bunt singles during the game, which made Brown happy.

“We played some small ball to put pressure on the defense,” he said. “Bunting is a lost art, but it forces the defense to make plays it normally doesn’t have to make.”

The Indians will be back in action Monday against Elkton and will take on Perryville two days later while Fallston hosts Perryville on Monday and travels to Bohemia Manor on Wednesday.