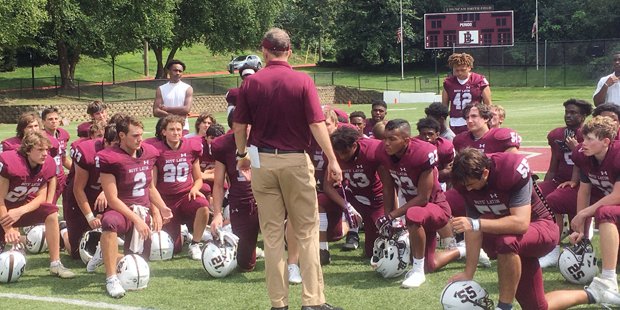 Boys’ Latin School’s football arrived where no Laker team has been since 2013 Friday. The Lakers defeated John Carroll School, 17-3, in the MIAA B Conference opener for both at J. Duncan Smith Field in Roland Park.

After allowing an opening score, Boys’ Latin’s defense shut down the Patriots the remainder of regulation to move to 2-0 for the first time since 2013. Brayden Garland finished with nine tackles, and defensive tackle Lucas Hazard five stops, including one for a loss.

The Patriots (0-2, 0-1 MIAA B) went on an eight-minute drive to start the game before settling for Mingle’s kick. Boys’ Latin answered with a 70-yard series as Malloy, a junior, scored from three yards out.

The Lakers extended the lead to 14-3 on Lymon’s 33-yard scoring strike to senior Nate Crouse. After a scoreless third, Boys’ Latin added to its advantage as Nicky Brown split the uprights from 26 yards out.

John Carroll looks to break into the win column, Friday at Concordia Prep.