Mervo celebrates after the final buzzer sounded in Friday’s victory over Paint Branch. The Mustangs advanced to the state football semifinals for the first time with their 21-20 victory at Montgomery County’s Paint Branch in the Class 4A North Region final.

For Mervo High and Chesapeake-Anne Arundel football teams this Thursday morning will mean something different: Practice. The Cougars and Mustangs are in the state public football semifinals after winning region championship games over the weekend.

Dunbar and Elkton punched return tickets to the state final four while the road ended for South River and Westminster.

After pulling off the biggest upset of the opening weekend, No. 20 South River ran into defending Class 4A East Region champ North Point, which routed them, 46-7, in the region final in Charles County.

The Seahawks (7-5 overall), who stunned then-No. 2 and undefeated Anne Arundel County league champ Broadneck, looked like their Cinderella run would continue as Joseph Foy ran 46 yards for a touchdown on the game’s opening drive.

The proverbial clock quickly went to midnight as North Point (12-0) scored 17 straight points to close the first half and never looked back. North Point will host Mervo Friday night at 7 in a 4A state semifinal.

South River, which started 1-4, won its final five games to reach its first postseason since 2012.

It was deja vu all over again for No. 15 Westminster. The Owls lost Frederick County’s Linganore, 52-20, in the 3A West final.

Courtesy of four first half turnovers, the Carroll County Athletic League champ Owls (8-4) put themselves in a 31-7 halftime hole against the defending state champs. The Lancers (11-1) opened a 52-13 advantage in the fourth quarter for a running clock.

Last season, Westminster put forth a valiant effort against the perennial Frederick powerhouse, falling 16-14, in the 3A West final after losing 50-28 in the regular season. The Lancers outscored Westminster, 100-27, in two meetings this season. 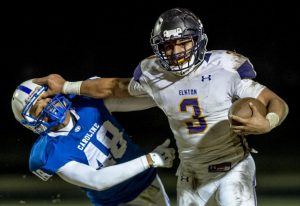 Elkton running back Tayshawn Watters (3) pushes aside North Caroline’s Carlton Johnson during Friday’s 2A East Region final. The Elks handed previously undefeated North Caroline a 24-13 loss for a matchup with Frederick County’s Oakdale in a 2A state semifinal this Friday evening.

Two years after reaching the 2A state final, Elkton is a win away from another trip to Navy-Marine Corps Stadium. The Elks ended North Caroline’s perfect season with a 24-13 victory on the Eastern Shore.

Trailing 7-3 after the opening quarter, Elkton (10-2) got a 4-yard touchdown pass from Nolan Null to Dah-Mar Triplett, a 7-yard touchdown run from Tashawn Watters and a 4th-and-goal stop at its 3, to lead 17-7 at halftime. Trevin Ewing added a 42-yard touchdown catch in the second half.

The Elks, who lost to Walkersville in the 2016 2A final, will play at Frederick County’s Oakdale Friday evening. Oakdale ended Montgomery County’s Damascus’ 53-game winning streak with a 24-7 win in the West final Friday.

No. 6 Glenelg is back in the 2A semifinals after a 35-0 whitewashing of Howard County rival River Hill in the South Region final. Yale University commit Wande Owens rushed for 225 yards and scored three touchdown for the Gladiators (12-0).

After posting a second straight shutout decision against River Hill (8-4), Glenelg (12-0) will host North Region champ New Town in a 2A state semifinal Friday. The Howard County champs will attempt to reach its first state final after losses to eventual state champ Damascus in 2017 (2A) and 2016 (3A).

For the 15th time in the last 16 seasons, No. 5 Dunbar is in state semifinals. The Poets routed Reginald Lewis, 41-0, in the 1A North final Friday at Sugar Cain Field in east Baltimore.

The defending state champ Dunbar (11-0), which has allowed just one touchdown in its last five games, will host Prince George’s County’s Douglass in a state semifinal Saturday afternoon at Poly’s Lumsden/Scott Stadium. The Poets lost to Douglass in the 2014 2A state final at M&T Bank Stadium.

After winning at Howard the week before, Mervo traveled to Montgomery County’s Paint Branch. The ninth-ranked Mustangs gained a hard fought 21-20 victory over the region top-seed for their first region title and state final four spot.

Bennett quarterback Brandon Scholl (4) tries to elude Chesapeake-Anne Arundel’s Devin Forrester (left) and a teammate during Saturday’s 3A East Region final. The No. 20 Cougars captured their first region crown with a 36-21 triumph in Wicomico County.

The Hillen Road school scored the go-ahead touchdown with 5 minutes, 21 seconds left in regulation, then stopped the Panthers on 4th down with 1:47 left, becoming the first Baltimore City team since 2oo4 to reach the 4A semifinals. Mervo will play at Charles County’s North Point Friday evening.

The Mustangs (10-1) are the fifth Baltimore City team (Dunbar, Edmondson, Patterson and Poly) to advance to the state semifinals.

Chesapeake-Anne Arundel, a program which qualified for the state playoffs for the first time in 2015, is also headed to the state semifinals. The Cougars defeated top-seed James M. Bennett, 36-21, in the 3A East final at Wicomico County Stadium.

Dylan Young threw a pair of touchdown passes, one to Colton Spangler. Spangler added field goals of 33, 36 and 29 yards and three extra-points.