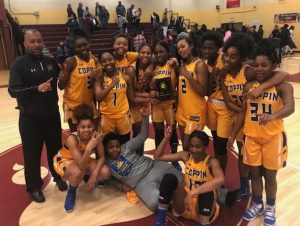 They didn’t disappoint, playing to a draw through 32 minutes. In overtime, the No. 9 Patriots pulled out a 57-54 victory in Edgewater.

New Era Academy was hoping to fill the final piece of the boys state Final Four puzzle and make history. But Southern of Garrett County had other ideas, denying the Jaguars in the 1A West final, 49-44, at Allegany College.

Xavier Rivers had 11 points for New Era (14-11 overall), which was unable to fully recover from an early 16-1 run by Southern-Garrett. Tyler Rodeheaver led Southern-Garrett with 17 points, and Justin Shafer posted a double-double of 12 points and 11 rebounds.

New Era, seeking its first region title, led 5-2 in the early going before Southern’s 16-1 response put the Baltimore City program in a double-digit hole. The Jaguars chipped away at the deficit, pulling to within 31-29 entering the fourth. 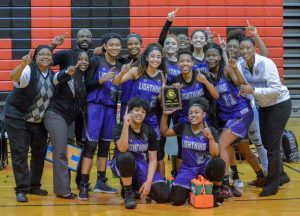 Long Reach earned a second straight 3A state Final Four spot with a victory at James M. Bennett in the North Region final in Wicomico. In a rematch of last year’s final, the Lightning will Frederick Thursday evening in a 3A state semifinal at Towson University.

Southern-Garrett, playing in front of a huge throng of supporters, pulled away with a 10-4 run. Diyea Little finished with eight points for New Era, which traveled two hours one-way to Cumberland.

Coppin Academy girls had a 2 1/2 trip to the Eastern Shore for the 1A East final. The Eagles returned to Baltimore with a second straight title, routing Washington, 76-48, in Princess Anne’s.

Tanae Galloway finished with 24 points for Coppin (17-5), and Nyshae Weaver added 21 points and 17 rebounds. The Baltimore City school rolled through the East Region, winning its four matches by an average of 31 points.

Long Reach is headed back to the 3A Final Four after taking care of James M. Bennett in the East final in Salisbury.

Jaelyn Swann led Long Reach (17-5) with 21 points while sister Lyric, an UMBC recruit, finished with 20. The duo combined for 10 3-pointers.

The Howard County co-champ Lightning will need another shot at Frederick, Thursday evening at 7 in a 3A state semifinal at Towson University’s SECU Arena. Frederick defeated Long Reach in last year’s state final.

The Cadets sent Westminster (18-7) reeling early, leading 21-4 after one, and 33-18 at halftime. Jillian Pumputis finished with 15 points for Westminster, which last reached the state Final Four in 1984.

Old Mill is back on the big stage for the first time since 2015, and did in compelling fashion, winning the rubber match with South River in Edgewater.

Atkinson, who scored the winning basket in Old Mill’s 59-57 victory over the Seahawks in the Anne Arundel County final a couple of weeks ago at North County, converted two free throws with 27.8 seconds remaining in overtime for the final margin.

The Patriots scored the first six points in overtime, but South River (21-4), which won the Anne Arundel County regular season title courtesy of its 56-55 victory over Old Mill in January, pulled even. 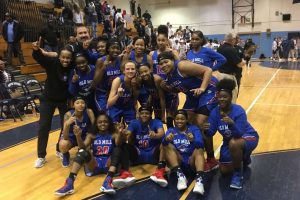 Old Mill won the 4A East Region title with an overtime victory at No. 10 South River Saturday. The ninth-ranked Patriots will play Bethesda-Chevy Chase in the 4A state semifinals Thursday at SECU Arena.

The Patriots found a way to win the one that mattered most. Next for Old Mill is Montgomery County’s Bethesda-Chevy Chase in a 4A state semifinal, Thursday at 5 p.m. at SECU Arena.