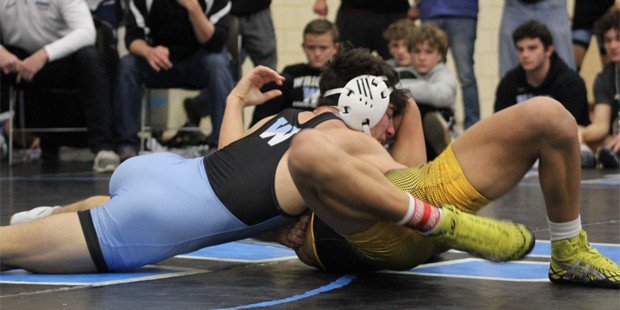 C. Milton Wright’s James Riveira could become only the ninth wrestler to earn four Maryland wrestling titles, and the 126-pound two-time Class 4A-3A state champion doesn’t have to look very far for inspiration from the first young man to do it.

Aberdeen graduate Matt Slutzky accomplished the feat in 1992 and lives directly across from and within walking distance of C. Milton Wright, where his daughter, Tasha, and Riveira are classmates.

“I have a pretty funny story with James. After he won his second title, my daughter, Tasha, and James were texting about school,” said Slutzky, 45, who earned crowns at 119, 125 and twice at 135.

“I told Tasha to tell him that James is a pretty good wrestler, but he has to win two more before he’s on my level. Then both him and my daughter said at the same time. ‘You won four titles?’ Neither of them had any idea.”

“Last weekend at UCBACs, someone made a bet with James that he couldn’t pin everybody in under a minute,” said fourth-year coach John Thornton, a 6-foot-2 former state champion who went 36-0 as a C. Milton Wright senior in 1999. “Before the finals, James pinned the first three guys in a combined 44 seconds. That just shows how dominant he can be even against really good guys.”

Riveira’s record on the year is 31-0 with 21 pins in 23 contested bouts, with the two others being major decisions and eight forfeits. Riveira’s career mark is 115-2 with 76 pins, his lone setbacks coming by fall during his sophomore and freshman seasons opposite senior private schools champion Chris Barnabae of Mount St. Joseph and three-time state champion Brent Lorin of Bel Air.

On Saturday at Paint Branch High of Burtonsville in Montgomery, Riveira will pursue his third Class 4A-3A North Region crown before traveling on March 6-7 to The Show Place Arena in Upper Marlboro, where he’ll grapple for his third state title.

“Riveira’s a good kid, works hard and he’s a talented wrestler,” said Slutzky. “The fact that he’s a local kid from Harford County and I know him is really cool. I’m definitely hoping he can pull it off.”

But if Riveira’s able to win two more crowns, he will become only the second wrestler from Harford County to do so.

“I didn’t realize that James could be the second wrestler from Harford County to win states four times,” said Rachel Riveira, whose son has not surrendered a takedown this season. “The ironic part is that Matt Slutzky’s daughter is in James’ junior class as well, which is pretty amazing.”

The achievement could make Riveira even more of an attractive college consideration to programs such as the University of Maryland, George Mason, Franklin & Marshall and the Naval Academy, all of which are recruiting him, according to fourth-year coach John Thornton.

“I believe Riveira’s a kid who could wrestle on the Division I level,” said Slutzky. “He’s got the capacity and the strength to do it.”

A two-time fourth-place finisher at states, Panda won a wild bout last weekend, 13-9, in overtime over Richardson for his third straight Howard County title, improving to 121-22 with 60 falls for his career.

“If you remember how I wrestled, I had a completely different style than James, being more of a control-type of wrestler who was comfortable winning 3-0,” said Thornton, 38. “But James is a pinner who never stops trying to score, is always on the offensive attack, getting into scrambles and looking for opportunities to turn you. You don’t wanna downplay or look past anyone, but I’d be very surprised if he doesn’t pin everybody.”

But as a 14-year-old freshman sat next to his father and coach, Dick, prior to his initial high school state championship bout, Slutzky looked across the Western Maryland College gymnasium to see how difficult his task would be.

“Anything can happen in four years,” said Slutzky, who subsequently beat Fallston’s Dan Jenkins, 8-2, to become only the third Maryland freshman to win a state title. “Land’s loss was a good example.”

Riveira was losing his initial bout against Lorin before being decked in a dual meet match, yet avenged that loss four times in the regional duals, UCBAC and regional tournaments and finally in last year’s dual meet before Lorin graduated a year ago.

“I was down by three or four points in our first match, then he got a late takedown and worked his way up for the pin,” said Riveira. “I think most of the pressure was on him after that, feeling he had more to lose — that’s how I knew that I had him.”

Riveira’s initial win against Lorin ended the latter’s 119-match winning streak, meaning the Mustangs’ grappler accounted for four of the Bobcats’ wrestler’s five career losses. The only other wrestler to defeat Lorin was state champion Sean Vosburgh of Leonardown, over whom Riveira owns a pair of victories.

Riveira lost to Barnabae in the finals of the War On The Shore tournament at Stephen Decatur High, which the Mustangs were not able to participate in last month due to a snow emergency situation in Harford County.

“I was very angry and disappointed about that because it didn’t even snow,” said Riveira. “But that loss humbled me, showing I could still be beaten. It’s made me work a lot harder to improve my general technique.”

Dominance has become routine for Riveira at counties, regions and states where he’s a combined 23-0 with 14 of his 16 pins being in the first period.

As a freshman, Riveira went 10-0 with four pins over the counties, regions and states, capped by decisions of 5-0 and 5-3 over Lorin in the county and regional finals. As a sophomore at those three tournaments Riveira was 10-0 with nine pins, eight of which were in the first period.

As a freshman at the UCBAC, Riveira earned a 68-second fall and a forfeit before shutting out Lorin for the crown. Riveira followed with the Class 4A-3A North Regionals, pinning in 49 seconds and 1:51 before defeating Lorin.

At states as a freshman, Riveira sandwiched first-round and semifinal decisions of 12-2 and 11-4 around a quarterfinal fall in 5:57. Riveira then won his initial state title, 6-4, over Walter Johnson senior Kemper Stearns (36-5).

A county and regional runner-up who was fourth at states the previous year, Stearns nearly pinned Riveira to tie the match at 4-4. Stearns had come off of a semifinal victory over Vosburgh, who decked Lorin in the quarterfinals. Lorin finished third at states that season. After losing to Riveira last year, Lorin dropped to 113 to win a third state title.

Riveira won last year’s UCBAC crown on falls in 35 and 28 seconds before decking Leonard in the final. At regions, Riveira pinned in 74, 1:40 and 51 seconds, and at states, Riveira nailed down falls in 58, 64 and 36 seconds before handling Vosburgh, 9-3.

At Edgewood last weekend, Riveira was among the Mustangs’ seven juniors on a squad that includes five sophomores and only two seniors as they ended Harford County rival Bel Air’s six-year hold on the UCBAC tournament championship.

The Mustangs (224 points) placed nine wrestlers within the top four of their weight classes with “Staki” Gourgoulianis joining Riveira on the victory podium.

“I’m definitely focused on winning states, but being on a team like this gives me an opportunity to be a leader,” said Riveira. “It’s a chance to train hard while helping some of my teammates learn and to improve.”