No. 16 Hawks seize the lead at half, hold on for shot at 2A state girls basketball championship 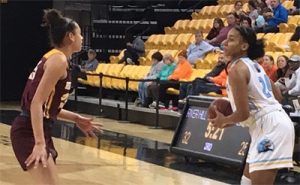 River Hill junior forward Saniha Jackson (right) is defended by Hereford senior guard Brynne Deluzio during Friday’s Class 2A state girls basketball semifinal at SECU Arena. The No. 16 Hawks advance to the state final with a 57-43 decision over the 15th-ranked Bulls.

Hereford High put all of its energy into catching 16th-ranked River Hill in the second half of Friday’s Class 2A girls basketball state semifinal.

Both times, the No. 15 Bulls were denied by the Hawks. In essence, that’s why 16th-ranked River Hill won, 57-43, and will be playing Middletown on Saturday at 1 p.m. at SECU Arena for a second state title.

Meanwhile, Hereford will have time to reflect on a rewarding 22-2 season under coach Ellen Fitzkee, but it didn’t begin that way Friday.

Behind an early outburst by senior guard Brynne Deluzio, who scored nine of the Bulls’ first 11 points, Hereford held a 12-10 lead at the end of the first quarter and added to the advantage on junior guard Reese Harden’s three-point play to open the second quarter.

After junior guard Kennedy Clark nailed a three for the Hawks from Howard County, senior center Bella Peterson scored inside to give the Bulls a 17-13 cushion that did not last long as River Hill went on a 15-5 run to close the half on top, 28-22.

A short jumper by River Hill senior forward Emile Masker deadlocked the score the first time with just under six minutes left in the half, marking the first moments of the nearly 23 minutes of the game that the Hawks would be either tied or ahead.

When Hereford senior senior guard Cam Smith knotted the score for the final time on a three-ball, River Hill (19-7) jumped back on top on on Clark’s answering triple.

A three-point play by freshman forward Anhyia Smith followed, and the Hawks were off and winging, eventually building a 14-point lead when the Hawks’ shortest player, 5-foot-3 senior guard Maggie O’Keefe, had a put-back midway through the third quarter.

As well as the offense was playing at that juncture, River Hiil’s defense was also doing its part.

“Coach always says if you’re not making shots you have to make stops,” junior forward Saniha Jackson said. “We had to play better defense to pick up our game.”

In danger of being blown out, the Bulls from Baltimore County fought back on the strength of back-to-back threes by Cam Smith, who was fouled and converted a free throw on one of those bombs.

“When we were catching up to them, I felt a lot more confident getting my shot off,” Cam Smith said about her second-half spree. “The atmosphere definitely motivated us to push ourselves to win.”

Deluzio then knocked down her first bucket of the half on an assist from Harden, who completed the 12-0 run on a three-pointer of her own moments later.

The comeback was almost complete, that is until Clark knocked down a cold-blooded three and Masker found Jackson with a deft inside pass for another score as the Hawks rebuffed that comeback bid to enjoy a 44-37 lead entering the final frame.

Clark said she had no qualms about taking the shot.

“Sometimes I know it’s going in, even when I miss,” Clark said. “Saniha saw that I was open and she got me the ball.”

The Bulls had one more rally in them, however, as Deluzio assisted Peterson in the paint, senior guard Libby May rainbowed in a three from the corner and Peterson swished a free throw, making it 44-43 with six minutes remaining in regulation.

Bending but hardly breaking, River Hill collected itself and righted the ship on a Jackson basket in the post, a Saniha Smith three, a Masker free throw and Clark’s final triple — she was 5-for-9 from behind the arc.

“We had lapses, and of course in basketball, there are runs — we had runs and they had runs,” River Hill coach Teresa Waters said. “They kept coming back, but we refused to fold.”

The Bulls had no reason to hang their heads after falling short for only the second time this season.

“This was an amazing experience, and one of the best years we’ve had in decades,” Deluzio said after the loss. “Just being able to come here is an accomplishment for us.”