Second half defensive stand push No. 13 Hawks to first state final four since 2007

During the first half of Saturday night’s Class 2A South Region championship game, the matchup zone that had got River Hill High’s boys’ basketball team through the playoffs with wins over Howard County foes Marriotts Ridge and Oakland Mills wasn’t working against visiting Thomas Stone from southern Maryland.

River Hill had given up 19 first quarter points and trailed by six points going into the locker room at halftime.

Behind tough on-ball defense, River Hill scored 13 straight points during the first five minutes of the third quarter, forced several turnovers, had a couple of blocked shots and even drew an offensive foul.

During that defensive stretch, almost everything resulted into transition layups on the other end for the Hawks and zero points for Stone.

The Hawks stayed with that defensive approach and delivered a 61-51 victory over the visiting Cougars to claim their first regional title since 2007.

The Clarksville school will take on North Caroline in a 2A state semifinal contest Friday evening on Gary Williams Court at the University of Maryland’s Xfinity Center.

River Hill (20-4 overall) outscored Stone, 35-19 in the second half and when Stone managed to get a shot off, the Hawks’ big men 6-foot-7 Dylan Daniels and 6-foot 5 OJ Okojie would swat them away or alter the attempts. River Hill two bigs combined for nine blocks in the win.

“We obviously made some adjustments and our bigs were able to alter some shots and get some outlets for some transition baskets,” said River Hill coach Matt Graves. “We were patient offensively, got some back doors, found our shooters and good things happened for us.”

After a slow start, senior guard Jaden Martin led the way with a team-high 16 points, scoring 15 in the second half, including 11 in the fourth quarter. Jacob Krause finished with 14, Daniels had 13 and Luke Champion scored six to anchor the Hawks senior core.

Stone (18-7), which missed winning its first region title since 2013, was led by senior forward Kamau Mitchell with a game-high 24 points, scoring 13 points in the first half, also nailing five three-pointers on the night.

“We knew we had to stop No. 42 [Mitchell], he was killing us the first half and we wanted to lock down defensively in the second half,” said Martin. “We started to execute offensively and forced turnovers, which led to easy baskets. We were in more of a rhythm the last two quarters and that helped us big time.”

In the pivotal third, River’s Hill offensive run began with a putback from Okojie and a three-pointer from Krause, who followed that up with a transition layup and a pass to Martin for basket on another fast break.

Krause then finished another lay-up and Martin banked in a jumper, all with more than three minutes left in the period to give River Hill a 39-32 advantage.

Mitchell finally broke the Cougars scoring drought with an and-1 conversion to cut the deficit to 39-35 and came within three points entering the fourth.

The Hawks lead grew to 12 points midway in the fourth as the Cougars did not have enough time to overcome the deficit.

“They’re a good team,” said Stone coach Dale Lambert. “They ran their stuff very disciplined. So once you make those kind of mistakes, and then they went back door a couple times right out of the third quarter. So they did some good things well that contributed to that run as well.”

Second half defensive stand push No. 13 Hawks to first state final four since 2007 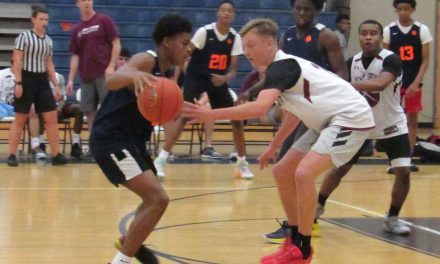 Goretti rolls; St. Paul’s falls in opening round of MAIT