Rising Sun volleyball roars back from two sets down 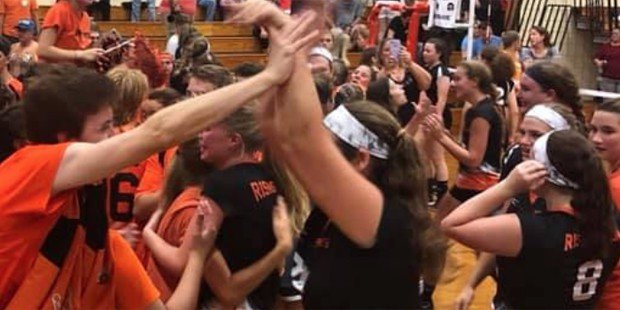 No. 11 Tigers overcome No. 18 Perryville; No. 14 Bel Air and Harford Tech also prevail in the UCBAC

No. 11 Rising Sun fell into a two sets to zero hole in its UCBAC Chesapeake Division volleyball match with No. 18 Perryville, Tuesday in Rising Sun, but the Tigers roared back to win three straight and prevail in five sets.

Emily Jackson led the way in the 5th set with two aces, three kills, three assists and a solo block as Rising Sun won 15-7. For the match she had five aces, eight kills, 14 assists and three blocks.

Breelyn Young led the Tigers with six aces, while serving a team best 71.4%, and Lauren Hudson had five.

Rising Sun is now 4-0 overall and 3-0 in the UCBAC Chesapeake Division. The loss was the first of the year for Perryville (2-1 overall, 2-1 UCBAC Ches.).

Next, the Tigers will face Bo Manor, on Thursday, on advance of potential first-place showdown with No. 14 Bel Air, next Tuesday.

While Rising Sun and Bel Air remained unbeaten in the Chesapeake Division, Harford Tech did the same in the UCBAC’s Susquehanna Division with a 3-2 victory over Edgewood.

The Cobras (5-1 overall) improved to 5-0 in their league and sit a half game ahead of Havre de Grace (4-0) in the battle for first place.