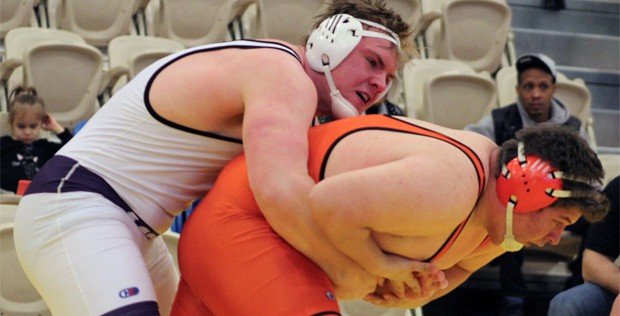 by Bill Loverocket
A season of dominance came to a close for Mount St. Joseph Saturday afternoon at the Stabler Arena on the campus of Lehigh University at the 84th National Preps wrestling tournament with a third-place finish.
Yes, the Gaels (ranked 22nd in the nation by FloWrestling) finished well behind superpowers No. 1 Blair Academy (NJ) and No. 2 Wyoming Seminary (PA), but what makes this showing so impressive is St. Joe saw 10 of their fourteen wrestlers achieve All-American status.
“I felt that our team peaked at the right time,” said St. Joe coach Harry Barnabae. “The competition here at the National Preps pits the best prep wrestlers in the country against one another. When you factor in the two top teams in the country, Blair and Sem, then you have one of the top tournaments in the country.
“We are happy to do as well as we did. It’s quite remarkable to place so many of our wrestlers as All-Americans. I am very proud of all of them and I am particularly happy that our seniors, Zach Phillips, Justin Henry, Jonathan Short and Ethan Stern finished strong.”
This, coupled with winning the Maryland private schools state title by over 100 points, puts this Gaels squad in the discussion for the best of coach Harry Barnabae’s tenure.
“I would have to say this is the most accomplished team I have coached since being here at the Mount,” Barnabae continued. “The 2015 through 2018 teams also rank very high, however, this special group of wrestlers accomplished all of the team’s goals and finishing in the top three, behind the #1 and #2 teams in the country just culminated a great ending to our season.
“The credit lies squarely on the dedication and work ethic of the wrestlers and we could not have done it without the commitment of our coaching staff which includes Chris Combs, Brad Mutchnik, Rick Couch and our heavyweight coach Shane Lowman who solely works with Isaac Righter and Parker Warner.” 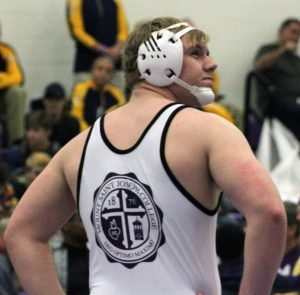 Issac Righter stands at the top of the National Preps podium after winning the 285 title on Saturday.