Riding a wave into the post-season 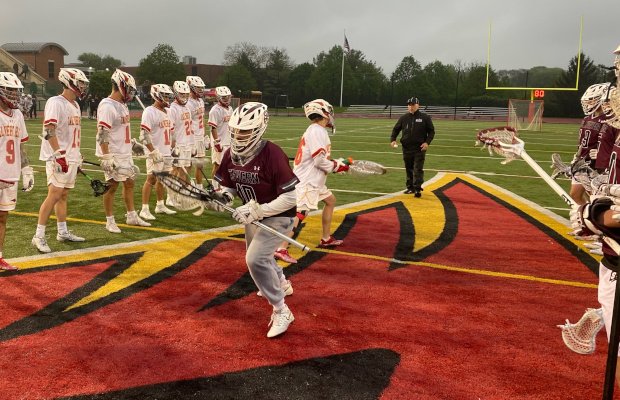 The Cardinals (11-4 overall, 6-3 MIAA A), whose playoff hopes appeared on life support just a couple of weeks ago, have now clinched their post-season ticket and, if the right things fall in place on Tuesday, they could climb as high as the No. 2 seed. Severn (11-5, 5-4) is also very much still in the playoff mix, but because of the tie-break scenarios, the Admirals probably need to win their season finale against first-place St. Mary’s and get some help.

Leading 5-3 at the half, the Calvert Hall started to find the keys to unlock the Admirals’ zone defense, scoring three straight goals after the break to take an 8-3 lead halfway through the third quarter.

After senior attackman Paul Baldwin (Air Force) found the net to pull the Admirals to 8-4, the Calvert Hall defense found an extra gear, causing numerous turnovers on the way to an 8-0 game-ending run.

Severn head coach Joe Christie was pleased with his team’s first- half effort.

“I liked where we were,” Said Christie. “We were winning face-offs, we had good opportunities, (hitting) three pipes in the first half. We felt good about our defensive scheme – our zone defense, and how we were playing it.”

Coach Christie then summed up what happened the rest of the way. “You can’t turn the ball over against this team. We coughed the ball up. That’s what really started the run.”

Head coach Bryan Kelly was pleased with his team’s effort.

“It was a great game, honestly,” said Coach Kelly. “I don’t think the score indicated how close it really was. We just opened it up in the third and fourth quarters. Severn played really well. It was nip and tuck early on.”

The defensive midfield has been increasingly buoyed by the play of junior Noah Brannock. As starting quarterback for the MIAA A Conference champion Calvert Hall football team, Brannock usually abhors turnovers, but enjoys causing them on the lacrosse field with a rugged, physical style of play.

“Lacrosse isn’t my first passion, but I know how to compete,” said Brannock. “We just go out there and play hard and physical. Being a quarterback, I always have my eyes downfield, and I like the physicality of lacrosse.”

If Calvert Hall wins and Boys’ Latin (6-2) loses one of its two remaining games, Saturday afternoon against Mount St. Joseph or Tuesday at arch-rival St. Paul’s, the Cardinals would tie the Lakers for second place and take the second seed by virtue of their head-to-head victory over BL. The Cardinals could also finish second with a win and a loss by St. Mary’s, over whom they also have a tie-break. If Boys’ Latin and St. Mary’s win out, Calvert Hall would be seeded third because it also owns a head-to-head win over Archbishop Spalding (6-3), with whom it is currently tied for third.

Calvert Hall could still end up in third, even with a loss, if Spalding (6-3) also loses, in its finale with St. Joe. A loss by either Spalding or Calvert Hall, or both, could set off a long list of potential tie-breaking scenarios, depending on what occurs in the other games. As things stand now, as many as five teams could end up tie for third.

Depending on what happens on Tuesday, Severn could win and still be eliminated and it could lose and still get into the playoffs. It all depends on which teams and how many are involved in the potential ties. The possibilities are too many to illustrate at this point. Eight teams are still alive for the six spots, including eighth place Loyola (4-5) which could get into the mix with a win over Calvert Hall and losses by Severn and St. Paul’s, who both lost to the Dons.

Coach Christie understands the importance of the Admirals’ last regular season game. “This whole thing can get fixed if we win on Tuesday.”