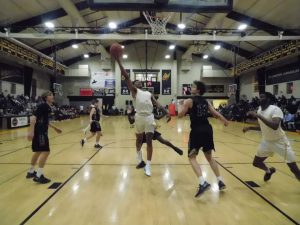 St. Frances’ Adrian Baldwin goes up for a layup during Monday evening’s MIAA A basketball match with Boys’ Latin School. Baldwin had 11 points and 10 assists, reaching the 500-assist career mark, as the fourth-ranked Panthers topped the No. 1 Lakers in East Baltimore.

About this time a year ago, St. Frances Academy boys basketball, dominant through the opening two months of MIAA A Conference play, began a late season swoon. The fall was capped with a home loss in the semifinal round.

The Panthers are determined not to have a repeat. No. 4 St. Frances defeated top-ranked Boys’ Latin School in a MIAA A match at Phelps Gym in East Baltimore.

Behind a spirited effort, led by Toles’ career-best night, the Panthers avenged a 68-65 loss to the Lakers in last year’s league semifinal. St. Frances went a pedestrian 5-3 (including playoff game) in the final month of MIAA A play after starting 14-0.

St. Frances rebounded to win its record 8th Baltimore Catholic League Tournament championship and reclaimed the No. 1 ranking in VSN’s Top 20. But its failure in the MIAA A was the only blemished in a huge turnaround campaign (finished 36-7 after winning 16 games in 2016-17).

The Panthers were engaged from the opening tip Monday.

“The guys were looking forward to it. We always like playing in the big moments,” said St. Frances coach Nick Myles. “Boys’ Latin deserves to be No. 1…my guys were prepared and executed. It was a total team effort.”

“I think we played kind of selfish last year against BL, but this year, we came out with a team effort,” said Toles. “We’re going to win together, we’re going to lose together. That’s been our mentality all season.”

Toles, one of the area’s most dynamic two-sport athletes, was locked in Monday. The 6-foot-3 guard went 8-of-11 from behind the arc, including four in the opening quarter (14 points).

“It was just a confidence thing for me. I saw them sitting back in the zone daring me to shoot, so I just showed them that I can do both — I can drive the lane and also shoot the ball,” said Toles, who holds football scholarship offers from the likes of Alabama, Maryland, Michigan and Penn State, and one from LSU for basketball.

Toles’ fourth dagger in the opening quarter gave St. Frances the lead it never relinquished. The Panthers opened up a 39-30 advantage late in the first half, but Spencer, a Loyola University recruit, scored the next eight for BL, closing the gap to 41-38 at the start of the second half.

The Panthers answered with 3-pointers from Baldwin and Toles, then their inside game, featuring 6-8 senior Jason Murphy, helped push the lead into double digits. Toles’ final 3-pointer in the closing seconds of the third left St. Frances with a 66-53 advantage going into the fourth.

“He’s one of the best athletes I’ve ever coached. When he gets into a rhythm, he can score in bunches,” said Myles. “That first half was fun to watch.”

It wasn’t as much for Lakers coach Cliff Rees, whose team’s perfect run in MIAA A play and nine-game win streak was wiped out Monday. The Lake Avenue school trailed by as many as 21 points in the second half.

“We like to pride ourselves as a shooting team and they out-shot us by far,” said Rees. “Jordan Toles was unbelievable all night long, then Ace [Adrian Baldwin] and Rajier [Jones] were just making the heady plays. Rebounding was a problem for us all night. They were clicking on all cylinders.”

The Lakers, who reached their first MIAA A final last winter, have a firm grasp on first-place in the MIAA A Red (10-1). St. Frances (11-1) leads Mount St. Joseph (12-2) by percentage points for first in the MIAA A Black. 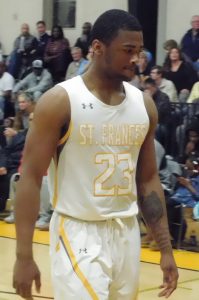 Jordan Toles had a career-best 29 points, including eight 3-pointers Monday evening for St. Frances. He had 23 points in the opening half.

The top four teams in each division advances to the MIAA A playoffs in a couple of weeks.

“Believe it or not, the week off because of the snow really helped us,” said Myles. “I think we’re getting better. We got a stretch of four games in seven days, so we got to get better everyday and take care of our bodies.”