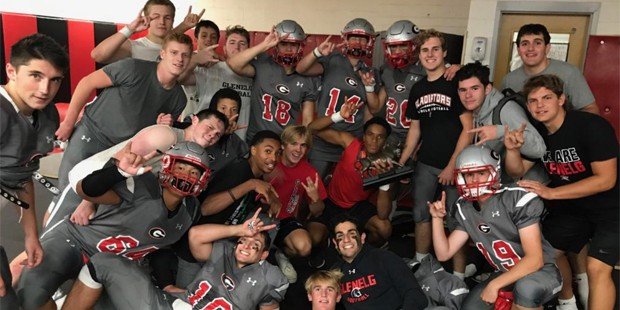 Chris Retzback booted a 29-yard field goal as time expired, Friday night at Glenelg, and the host Gladiators claimed a thrilling 10-7 Howard County football win over visiting Howard, as Glenelg retained the Elgard Trophy, for which the two teams compete each fall.

As the first two high schools to open in Howard County, Glenelg and Howard have the County’s longest rivalry and established the Elgard Tropy, named by combining the last three letters of each school’s name, as the prize for their annual football battle. It remained up for grabs on Friday until the last possible second.

The defenses dominated for a majority of the first three quarters, but Glenelg finally broke the ice with less than five minutes to play in the third quarter with a 15-yard touchdown run by Kyle Dry to take a 7-0 lead.

Howard took advantage of a short field, midway through the fourth quarter, and Alex Rebaza, who had fumbled to thwart a third quarter scoring opportunity, made amends with a 3-yard TD run to tie the contest at 7-7.

With the pressure on in the final two minutes, the teams combined for four consecutive turnovers, three fumbles and a pivotal interception by Glenelg’s Drew Sotka, all on the Howard end of the field. Sotka’s interception gave the Gladiators the ball at the Lion 25 with 1:22 left on the clock and it led to Rezback’s game-winning kick.

The win allowed Glenelg to improve to 3-2 overall and 2-1 in Howard County. The Lions (1-4 overall) lost for the fourth straight time. They are now 1-1 in the league.

Pictured above: During its post-game celebration in the school’s wrestling room, the Glenelg football team posed with the Elgard Trophy, which the Gladiators retained with their 10-7 win over rival Howard.