Howard runs for 96 yards and 3 TDs in first start at QB since 2019; Dennis-Sutton plays both sides of ball as No. 5 McDonogh tops 17th-ranked Loyola (VIDEO HERE!) 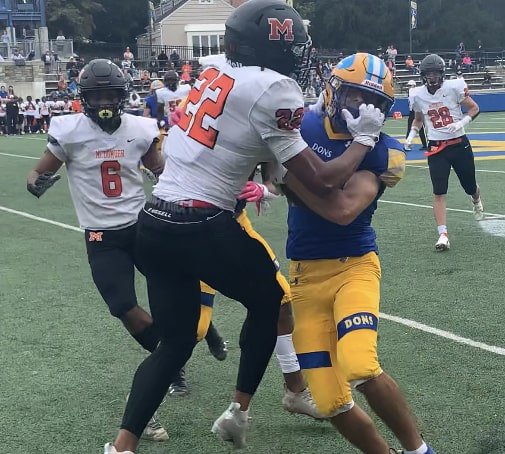 McDonogh’s Niles Riding (22) gets Loyola’s Shane Elliot’s facemask while trying tackle to him after a pass play in the first quarter of Saturday’s football game. The 17th-ranked Dons scored on their opening possession, but the No. 5 Eagles held them scoreless the remainder of the game for a 24-7 victory at Hargaden Field in Towson.

by Nelson Coffin
Preston Howard was back in the saddle as No. 5 McDonogh School’s starting quarterback on Saturday at Loyola Blakefield and the results — a 24-7 victory over the 17th-ranked Dons — were very positive for the Eagles.
Kaden Martin had started the previous five games for coach Hakeem Sule’s club until a foot injury sustained in a 14-11 setback to Mount St. Joseph sidelined the heralded senior transfer from Knoxville Catholic.
Martin was not with the team on Saturday for the battle between A and B Conference squads.
Sophomore Santino Sanchez was in the backup role and took several snaps in the final minutes of regulation after senior defensive back Niles Riding’s second interception of the game closed the door for good on Loyola.
Howard ran effectively throughout the contest, finishing with 96 yards on 16 carries and scoring all three McDonogh (2-4 overall) touchdowns.
Although his passing was not quite as sharp (8-for-12, 35 yards, one interception) as he would have liked, he knows that he should improve in that department with more reps coming his way.
“I feel like I’m kind of getting back in the groove,” Howard said. “But I haven’t worked on my throwing in awhile.”
In addition to having Howard back under center, the Eagles welcomed a fully healthy Dani Dennis-Sutton back into the fold as a two-way lineman.
The 6-foot-5, 260-pound Penn State University recruit excelled in both positions, wreaking havoc as a defensive end with three sacks and a tackle for loss while ably protecting Howard’s blind side as a commanding left tackle.
He even showed off his running back chops when he scooped up a fumble and rumbled around right end to pick up a first down and sustain a drive that eventually ended on a 38-yard field goal by senior Sam Asplen that put McDonogh ahead for good with 42 seconds remaining in the first half.
Dennis-Sutton that he felt comfortable on the O-line quickly.
“It wasn’t too bad,” he said. “I just tried to get in front of my guy. It was a lot of fun being back out there.”
Teeing off on both Loyola quarterbacks, senior Aiden Parson and sophomore Jayden Moore, was what motivated Dennis-Sutton the most.
“I just try to read and react,” he said. “Everybody like to pass rush — and that’s my specialty.”
The Dons (4-2) struck on their first drive when senior running back Micah Robinson snared a swing pass from Moore and traveled 11 yards for a TD. Senior Conor Becks’ point-after made it 7-0 with 6:13 left in the first quarter.
McDonogh knotted the score on its next possession with a 67-yard drive, fueled by a 44-yard gallop by senior running back Stefan Egbe, that ended with Howard’s 2-yard plunge on fourth down.
Riding’s first interception, which came just one play after Loyola junior defensive back Marcus Hines picked off Howard, started the go-ahead drive in the second quarter.
McDonogh penetrated to the Dons’ 9-yard line before defenders Hines, Parson and sophomores Trevor Syzmanski and Jonas Kligys stood strong enough to hold the Eagles to Asplen’s field goal.
A tackle-for-loss by McDonogh sophomore linebacker Noah Onkst set the tone for a three-and-out on Loyola’s next drive and the Eagles took advantage on an 11-play, 51-yard drive completed on Howard’s second TD to lead, 17-7, with five minutes left in the third quarter.
Junior defensive back Demetrius Smith’s interception gave McDonogh good field position around midfield on Loyola’s second play of its next possession and the Eagles cashed in again.
Egbe’s 34-yard jet sweep keyed the drive that Howard finished with a 7-yard bolt up the middle for the game’s final score.
Sule said that he liked what he saw from Howard and the Eagles.
“We kept the chains moving today,” he said.
Sule added that he was pleased that Sutton-Dennis stepped into a new role on offense.
“We needed depth on the O-line, and he told me that he would do whatever it takes to win,” the coach said. “He looked really comfortable and was very aggressive.”
Loyola coach Anthony Zehyoue said that the Dons prepared for Howard, a Maryland commit, to be the Eagles’ signal caller.
“We had heard that he was going to play,” he said. “I thought our kids gave a great effort to be down only 10-7 at the half. We just struggled to sustain drives today.”

Preston Howard (left), in his first game at quarterback since 2019, rushed for 96 yards and three touchdowns in McDonogh’s 24-7 win over Loyola Blakefield on Saturday. Meanwhile, the Eagles were bolstered by a strong effort from two-way lineman Dani Dennis Sutton in just his second game back from an injury.

He added that although he inserted Parson to play quarterback in the fourth quarter, Moore will continue to start at the position.
“Jayden is just so passionate about the game and takes mistakes to heart,” he said. “He just has to learn to go on to the next play. He struggled a little bit, but we still believe in him and he is our quarterback.”
NO. 5 MCDONOGH SCHOOL 24, NO. 17 LOYOLA BLAKEFIELD 7
McDonogh 0 10 14 0 — 24
Loyola Blakefield 7 0 0 0 — 7
First quarter
Loyola – Micah Robinson 11 pass from Jayden Moore (Conor Becks kick)
Second quarter
McDonogh – Preston Howard 2 run (Sam Asplen kick)
McDonogh –  Asplen 38 field goal
Third quarter
McDonogh – Howard 2 run (Asplen kick)
McDonogh – Howard 7 run (Asplen kick)