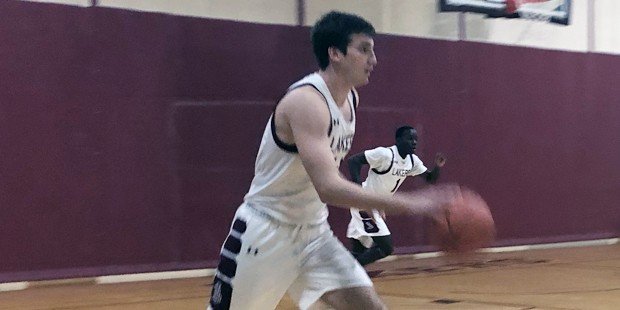 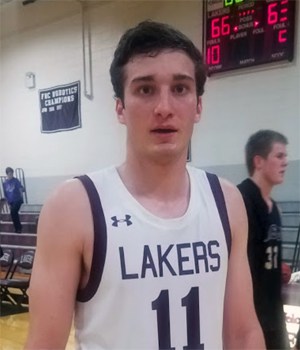 Prior to Friday’s MIAA A Conference basketball game against No. 5 Mount St. Joseph, Boys’ Latin head coach Cliff Rees said he asked each member of his team to make the same New Year’s resolution: “Find your jump shot.”

At least one Laker took his coach’s words to heart as senior guard Lorenzo Donadio exploded for 34 points to help BL pull off a 66-63 overtime win over the Gaels who were coming off a three-game sweep and a championship at the Junior Orange Bowl Tournament in Miami, Fl over the holiday break.

The night truly belonged to Donadio, a 6-foot-4 sharpshooter who nailed an NBA-range three-pointer at the fourth quarter buzzer to forge a 57-57 tie and send the game into overtime. He then scored four points in the extra session as the Lakers outscored the Gaels 9-6 to capture the win.

Rees said that his final shot in regulation was designed.

“We came out of the timeout, and we told the team to get the ball in his hands, and for him to pull up with that deep jumper,” said Rees. “He did, and he hit it.

Donadio, who is known as Zo appreciated the confidence his coach and team had in him.

“My teammates set me up,” he said. “I was confident that I could make that shot. Coach told be to look for the ball, catch it, and pull up. We shot the ball well tonight, and our defense stepped up.”

Rees added that he was pleased with his teams’ ability to finish, especially against a good team like Saint Joe.

“Zo is a big-time player. He has a lot of athletic ability, has a great basketball IQ and great shooting ability. He’s a tough, hard-nosed, smart player.”

Rees was also happy with the way his team scrapped.

“Our rebounding was a key to this win. We scrapped and fought, and I was really happy with our effort on the boards.”

St. Joe was 10-for-10 from the free-throw line down the stretch, which gave them a 57-54 lead with five seconds to go in regulation, before Donadio’s seemingly impossible, miracle three went through the twine to send the game into overtime.

On a night when their jump shots were not falling, the Gaels (11-3 overall, 5-2 MIAA A) were a blistering 23-for-24 (96%) from the free throw line, and it looked their performance from the stripe would be enough to achieve the victory. But, the Lakers answered with clutch three-point shooting at the end of regulation and again in overtime.

The Lakers hit ten threes on the night, two of which came in the overtime, which gave them just enough to earn the win.

Kendall Walker threw in 16 for the Lakers, six of which game in a clutch fourth-quarter rally.