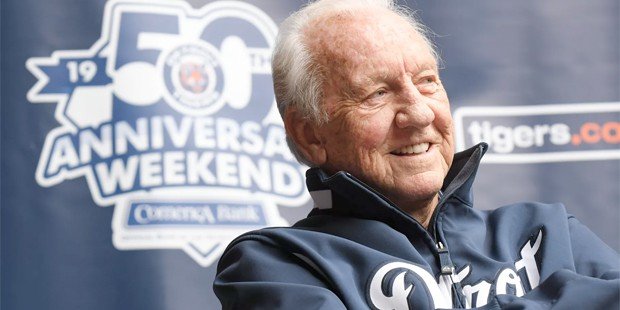 Perhaps the greatest high school baseball player to ever emerge from Baltimore, Al Kaline, passed away Monday afternoon at his home in Detroit, from an undisclosed illness.

Kaline went right from a sensational high school career at Southern High School (now Digital Harbor High School) into the major leagues with the Detroit Tigers, where he enjoyed a Hall of Fame career over 22 seasons.

In 2018, VSN’s Joe DiBlasi (left) and Jim Price, a 1968 teammate of Kaline’s with the Tigers, dedicate the baseball field at Swann Park as Al Kaline Field.

Before he left Baltimore, Kaline also starred with the famed Leones/Johnny’s/Corrigan Baseball club at Swann Park in South Baltimore. Kaline is among 50 players from that team which went on to play professionally in the major leagues and he is one of two, Reggie Jackson being the other, eventually inducted into the Major League Baseball Hall of Fame.

In 2019, the baseball field at Swann Park was officially named Al Kaline Field.

“Growing up in South Baltimore and going to Southern High School and playing baseball there, Al Kaline was a role model for all of us,” said Varsity Sports Network’s Joe DiBlasi, a close friend of Kaline’s, who interviewed the legendar star in 2018. “This one hurts. He was as a great man and one of the most gifted baseball players I ever saw.”

During is 22 years in the big leagues, all with the Tigers, Kaline appeared in 2,834 games and had 3,007 career hits with 399 home runs. He was selected to 18 All-Star games, earned 10 Gold Gloves and won one batting title. He was also an outstanding right-fielder, at one point setting a major league record for playing 242 consecutive error-less games. Kaline also helped Detroit win the 1968 World Series and earned the nickname “Mr. Tiger.”

Al Kaline was inducted into the Major League Baseball Hall of Fame in 1980.

Kaline’s uniform No. 6 was retired in 1980 and the same year he was inducted into the Hall of Fame with 88.3 percent of the vote, in his first year of eligibility.

After retiring from the field, Kaline spent 26 years as a broadcaster for the Tigers and, since 2002, had served as a special assistant to the owner and General Manager.

Below is the 2018 interview conducted by Joe DiBlasi at Oriole Park at Camden Yards, prior to a game between the Tigers and the Baltimore Orioles.