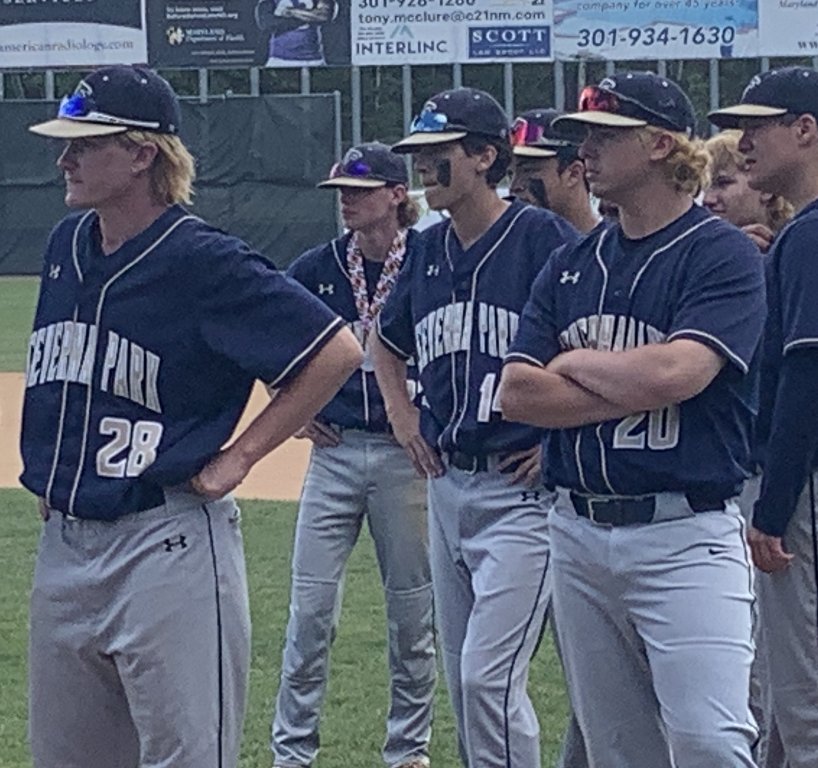 Severna Park baseball players await the start of the postgame awards ceremony following Saturday morning’s Class 4A state champonship game. The No. 2 Falcons never got on track against Montgomery County’s Sherwood, which claimed a second straight title with a 11-0 victory at Regency Furniture Stadium in Waldorf.

Everything was ready for the rematch in the Class 4A state baseball final Saturday morning at Regency Furniture Stadium.

There was only one problem – one of the teams failed to show.

No. 2 Severna Park got the rudest of wake-up calls as Montgomery County’s Sherwood rolled to a 11-0 five-inning victory and a second straight championship. The Olney school (24-1 overall) became the first school to win back-to-back 4A titles in 40 years.

It came at the expense of Severna Park (19-4-1), still looking for its fourth overall state crown and first since 2009. In a game played at 10 a.m. Saturday because of inclement weather Friday night, the Warriors took advantange of sloppy play and a non-existent Falcon offense that produced only a line-shot single to left by Luke Herz in the first inning.

Sherwood sophomore righthander Mac Crismond fired a one-hitter with six strikeouts, one walk and one hit-batter to run his personal record to 7-0.

“We picked a bad day to play our worst game of the year, probably,” said Falcons’ 10th year coach Eric Milton, who suffered his fourth loss in a state final. ”We made mistakes early, lost an opportunity in the first inning to get on the board. And everyting went there way after that and just kind of snow balled after that. We haven’t played that bad all year. Sherwood is a very good team, absolutely. And they played better today and deserved it.””

Herz, who is the Falcons No. 3 hitter and an outstanding senior first baseman, roped his knock to left in the first inning following designated hitter Angel Santiago-Cruz reaching first base when his third strike got away from the Sherwood catcher. Crismond got the next two batters to escape the first untouched and would not give up a hit and only three baserunners the remaining four Falcon at-bats.

Last year, Severna Park went to extra innings with Sherwood in the 4A final. Ryan Bouma, who knocked in two runs on two base knocks Saturday, singled in the game winner in top of the eighth to give Sherwood a 5-4 victory.

”Last year was the tougher one losing in extra innings,” said Herz. “Today they destroyed us in every way. They hit the ball, we couldn’t. They pitched, we couldn’t. I mean, we had errors, they didn’t. They’re a great team and outplayed us today. We are so young and they were tight because they had never experienced a state championship game. Our inexperience showed today.”