Rematch in the ‘Ship 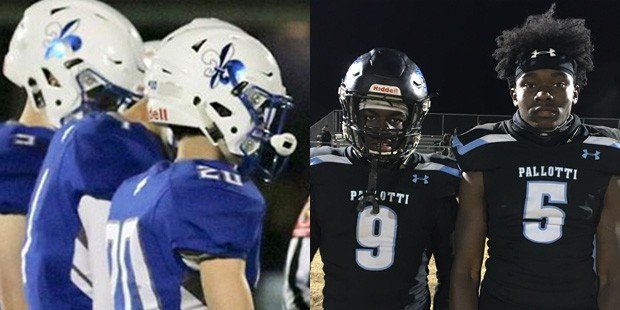 Senior running back Emani Alford (left) rushed for three TD’s and 140 yards while junior wideout Isaiah Perkins caught a 75-yard bomb and totaled 140 yards through the air in St. Vincent Pallotti’s 35-6 triumph over Archbishop Curley in an MIAA B Conference semifinal Friday night in Laurel.

by Nelson Coffin
Temperatures dipping into the 30’s on Friday night at Fairland Regional Park in Laurel weren’t low enough to slow down red-hot St. Vincent Pallotti, which performed like a well-oiled machine in hammering Archbishop Curley, 35-6, in a MIAA B Conference football semifinal.
The 13th-ranked Panthers, who improved to 10-1 heading into next Saturday’s final against two-time defending champ St. Mary’s at 3 p.m. at Archbishop Spalding’s Whittles Field, simply took it to the Friars (7-4) from the first play to the last.
No. 14 St. Mary’s, on the other hand, had to rally from 11 points down with five minutes left in regulation to top John Carroll School and return to the title game.
Pallotti running backs Emani Alford, Mekhi McDaniels and Keshawn Wheeler were both elusive and patient, slipping through slivers of daylight, skirting the edge of the defense or rumbling straight ahead with a bruising style of ground and pound.
Working with a short field after the opening kickoff was returned deep into Curley territory, Alford finished the first drive with a 6-yard TD run to give his team the lead for good.
He also capped an eight-play drive in the second quarter with a 1-yard plunge after a 38-yard pass from senior quarterback Tyler Faison to junior wideout Isaiah Perkins gave the Panthers a first down at the Curley 11.
Meanwhile, the Friars’ offense was not having much luck moving the ball against a Panther defense featuring senior linebacker DeVahn Newton (6-foot-2, 235 pounds), senior nose guard Zion Coleman (5-11, 260), junior lineman Christopher Boti (6-2, 265), sophomore tackle Cornell Evans (6-1, 285) and sophomore end Braxton Harsley (6-0, 185).
Yet Curley still found ways to give its offense some momentum after senior defensive end Zach Szyzybor blocked a Panther punt to start a drive at the Pallotti 41-yard line midway through the third quarter.
That opportunity disappeared, however after a couple of runs by senior running back Julian Howard only netted 5 yards before a Coleman sack on fourth down turned the ball back over to the Panthers, who capitalized by scoring on a 19-yard Alford jaunt 10 plays later to balloon the lead to 21-0 with just over two minutes left in the period.
Alford said the key to his 140-yard night on the ground was being “patient” against the Friar defense.
“I have faith in my offensive line,” he added.
Two plays into Curley’s next possession, Newton recovered a fumble and Pallotti capitalized two plays later when Perkins made a nice over-the-shoulder grab of a Faison toss to complete a 75-yard TD play for a 28-0 cushion with under a minute remaining in the third.
Perkins said that his two long-gainers through the air were due to Curley’s gamble in the secondary.
“They played me man-to-man with no safety behind,” he said.
The Friars showed some explosiveness of their own early in the final period when Howard streaked 74 yards for a score.
Pallotti’s final touchdown came on a 50-yard interception return by senior free safety Osei Dixon.
“We were just trying to play straight football,” Pallotti coach Tony Ashley said. “We’re still young and hungry. We only lose two starters on defense and two on offense.”
Curley coach Brendon Ireton said that his team played hard to the final whistle.
“Pallotti is a really talented football team,” he said. “And this was our first playoff opportunity. To win a game like this, you have to be great at all three phases of the game. We just made a couple of mistakes and we struggled to get things going.”
MIAA B CONFERENCE FOOTBALL SEMIFINAL
AT FAIRLAND REGIONAL PARK
NO. 13 ST. VINCENT PALLOTTI 35, ARCHBISHOP CURLEY 6
AC 0 0 0 6 — 6
SP 7 7 14 7 — 35
1ST QUARTER
SP – Emani Alford 6 run (Andres Pesoa kick)
2ND QUARTER
SP – Emani Alford 1 run (Andres Pesoa kick)
3RD QUARTER
SP – Emani Alford 19 run (Andres Pesoa kick)
SP – Isaiah Perkins 75 pass from Tyler Faison (Andres Pesoa kick)
4TH QUARTER
AC – Julian Howard 74 run (kick failed)
SP – Osei Dixon 50 interception (Andres Pesoa kick) 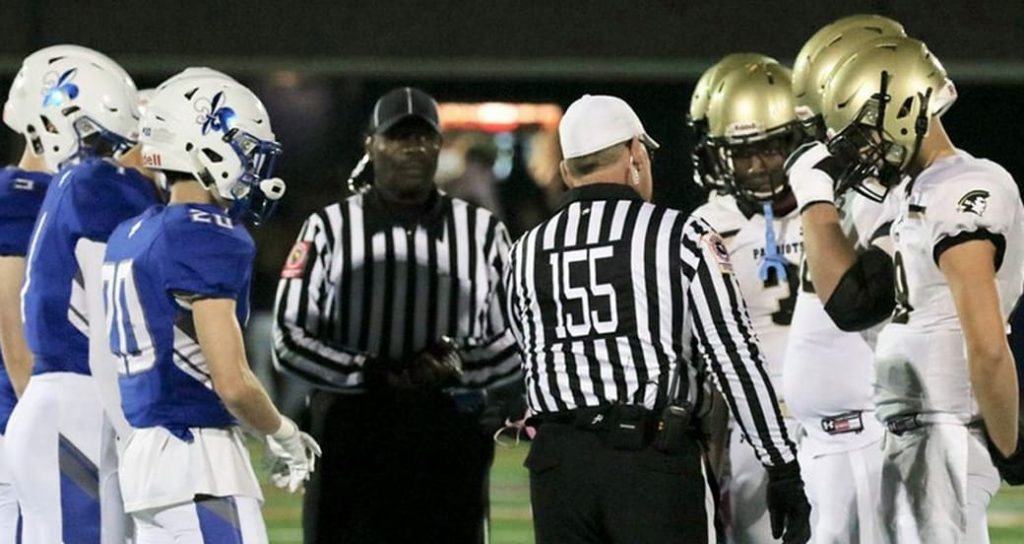 The outcome remained in doubt from the pre-game coin toss to the final whistle, but St. Mary’s eventually got past John Carroll to earn a third straight trip to the MIAA B Conference title game. (photo – Kim Kreider Muhlenfeld)

In Annapolis, St. Mary’s earned the right to defend the title it has won in each of the last two season, with a scintillating fourth quarter comeback to defeat John Carroll, 28-24, in the other B Conference semifinal.
St. Mary’s junior Ki’Sean Gray-Dantzler put on a show that will be remembered in Saints’ lore for ages, rushing for 247 yards and two touchdowns, as well as grabbing a TD reception. Without his running mate Alex Wicks, who suffered a season-ending shoulder injury last month, St. Mary’s needed everything Gray-Dantzler could deliver and deliver he did.
John Carroll (6-4), looking to avenge a 28-21 loss earlier this year, threw the first punch, scoring on an 80-yard return by London Drummond on the game’s opening kick. St. Mary’s (8-3) rallied to take a 13-7 lead with Gray-Dantzler’s first touchdown run and a 65-yard touchdown pass from quarterback Chris Golini to Gabe Souza, but John Carroll went to the half with a 14-13 lead when Drummond reached the end zone for a second time, this time on a short plunge.
The Patriots pressed their advantage in the third quarter, collecting a 33-yard field goal from Gavin Greene on the first possession of the third quarter and the Patriots appeared to be on their way to next Saturday’s MIAA B Conference title game when Roman Hemby gave JC a 24-13 lead, with a 31-yard touchdown run, with just five minutes to play.
Showing its championship mettle, however, St. Mary’s staged a dramatic comeback.
Gray-Dantzler and Golini connected for a 24-yard touchdown pass and again on the two-point conversion to pull the Saints within three, at 24-21. Then, Gray-Dantzler led the Saints back down field again, with several big runs, before scoring the go-ahead touchdown on a 5-yard run.
John Carroll’s attempt at responding was cut short when quarterback Austin Brinkman was the victim of strip sack by Brady Russell and Samuel Ibeziako, while Quinn Donoway recovered the fumble for the Saints.
St. Mary’s and Pallotti will tee it up in the B Conference title game for a second straight year on Saturday afternoon at Archbishop Spalding. The Panthers won the crown in 2016 before the Saints have won the last two.
MIAA B CONFERENCE FOOTBALL SEMIFINAL
AT PASCAL FIELD
NO. 14 ST. MARY’S 28, JOHN CARROLL SCHOOL 24
JC  7 7 3 7 — 24
SM 7 6 0 15 — 28
1ST QUARTER
JC – London Drummond 80 kickoff return (Gavin Greene kick)
SM – Gabe Souza 65 pass from Chris Golini (Cole Randolph kick)
2ND QUARTER
SM – Ki’Sean Gray-Dantzler 5 run (kick failed)
JC – Drummond 1 run (Greene kick)
3RD QUARTER
JC – Greene 33 FG
4TH QUARTER
JC – Roman Hemby 31 run (Greene kick)
SM – Gray-Gantzler 24 pass from Colini (Gray-Dantzler from Golini)
SM – Gray-Gantzler 5 run (Randolph kick)