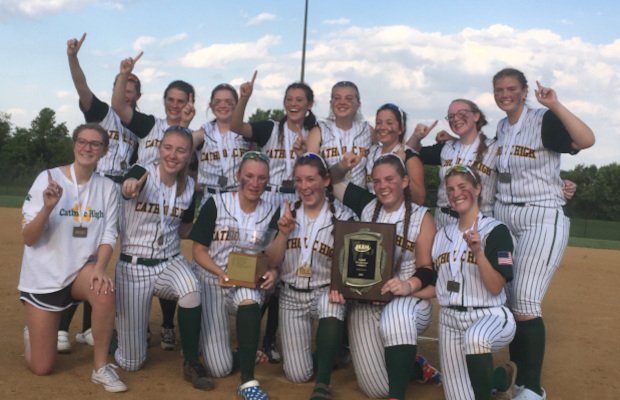 Sophomore pitcher Ally McBride said that she and her Catholic High teammates came into the IAAM B Conference championship softball game ready to pay back a debt they owed No. 19 Mercy since last year’s final. 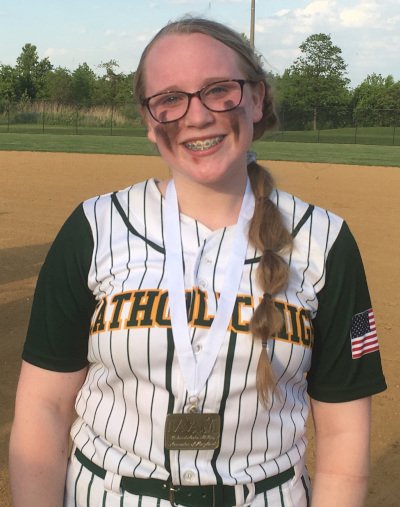 Catholic High sophomore pitcher Ally McBride sparkled in eight innings of relief against Mercy in the IAAM B Conference championship game on Tuesday. The right-hander allowed just four hits and three runs while striking out eight Magic batters in the Cubs’ 6-4 victory.

“We never came out cocky,” McBride said, noting that it was the top-seeded Cubs who were upset in the championship round in 2021 by the Magic. “They beat us, 6-0, last year when we were the No. 1 seed — and we were ready to fight back.”

It was a long fight for all involved, especially for McBride who allowed just four hits, issued four walks and fanned eight in eight innings of superb relief of classmate Kaylah Morosko at Bachman Park in Glen Burnie on Tuesday afternoon as the Cubs prevailed, 6-4, in 10 innings to claim their first B Conference crown since 2011.

McBride had to escape a no-out, bases-loaded jam in the eighth inning to get the job done.

Catholic coach Derrick Adams said that he and his pitchers had a plan on how to work against Magic’s senior sluggers Meadow Hallmen and Gretchen Barstad, both of whom were on base when McBride wiggled off the hook by striking out the next two batters and coaxing a fly to left for the third out.

“We didn’t want Meadow to get her arms extended,” he said. “So we worked her inside, then up in the zone. Gretchen is a little taller, so she can stand off the plate a little more. Her (two-run ) double (in the third) came on a pitch inside where we wanted it, but she was still able to drive it. We just wanted to make sure that they didn’t beat us.

“We quieted those bats, and that really helped us.”

The flawless fielding — the Cubs (11-2, 9-1 league) did not make an error — behind her was just as sharp, turning a key double play to end the ninth inning on a throw from senior center fielder Catherine Stock to freshman shortstop Kaylee Castle.

“I’ve always been a person who trusts my fielders more and more,” said McBride, who tossed a no-hitter against Notre Dame Prep on just 50 pitches in April. “They never let me down, even if it looks like it on the field sometimes. They inspire me.”

Adams said that there was a method to his madness in starting Morosko.

“We wanted to give Mercy a different look,” he said. “Those two inning (Morosko pitched) really helped.”

Morosko, who gave up just one run on a single by freshman Emma Ecton in the second, had an excellent day at the plate as well. She belted a home run leading off the second frame to give Catholic a brief 1-0 advantage.

There were plenty of other heroes, including Stock, who laid down a bunt single in the 10th to set the stage for senior first baseman Justine Kuszewski’s clutch two-run pop single that landed just beyond the infield. Senior Andi Kremer’s RBI single capped Catholic’s key three-run outburst.

Before that uprising, Barstad, who pitched all 10 innings, had handcuffed the Cubs on just five hits and had fanned 11. Her lone walk came back to haunt her when a single by Morosko and an error preceded RBI singles by Castle and sophomore Abigail Thompson to knot the score at 3-3 in the fourth.

Top-seeded Mercy was just unable to break through when it needed to the most.

“All the credit goes to Catholic,” Mercy coach George Panageotou said. “They made all the plays in the game — and we didn’t. When we did get the bat on the ball, it went right at them.”

McBride said that her drop curve was her out-pitch, although she had to rely on her fastball when she fell behind in the count against the Magic (11-3, 9-1).

She also used the change-up more frequently, she said, because “the top of their lineup can really hit the ball.”