Reflections on a memorable postseason

It’s been a few weeks since the state public boys’ basketball tournament concluded, but it’s not too late to reflect on a great year for the Baltimore area.

Here’s my reflection on each classification, from the perspective of someone who evaluates high school basketball players and project their prospects for succeeding on the college level.

In Class 1A, Dunbar defeated Fairmont Heights, 59-48, in the final, on the the strength of their dynamic duo of 6-foot-5 senior Dashawn Philip and Jamal West, a 6-foot-5 sophomore with a bright future.

Philip, who mysteriously has no Division I offer, led the way with 27  points with slithering drives, quick pull ups, and every other way you can score. He even took time to knock down a three.

Division I schools where are you?

As for West, a high-major prospect in waiting, he got 15 points to go along with 14 boards. He’s a young man in motion with a lot of double-doubles ahead of him, and with a coach like Cyrus “Diego” Jones guiding him, he is a cinch to become the whole package. 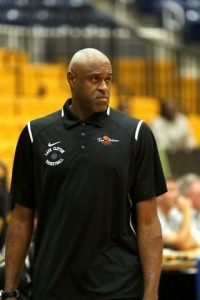 Lucas finished with 15 points, gathered 14 rebounds and managed to block three shots while changing several others. All three will be terrific small college players. Herman coaches them up, and makes them play hard.

Lewis finished a terrific season with a double-double of 20 points and gathering in 12 rebounds. He showed why he’s easily one of the Top 50 sophs in the country, and if he keeps progressing he could be the next McDonald’s All-American from the Charm City.

His teammate and Poly leader, Demetrius Mims, a 6-foot-5 fluid forward who chipped in with 17 points, and showed why he will be an asset to Long Beach State University next season. 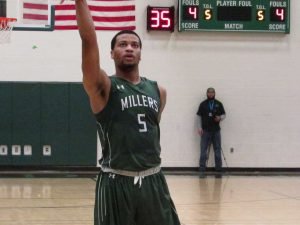 The Millers were led by 6-foot-2 guard Jordan Goodwin and 6-foot-5 forward Eric Turner, with 15 and 13 points, respectively. The duo, who transferred from St. Frances Academy, will make outstanding small college players.

The 4A was the most fun box of chocolates (remember Forest Gump), with Perry Hall hooking up with a tough and well-coached Bladensburg squad, which was a dark horse surprise out of Prince George’s County.

The game was like a roller coaster, much like the Hall’s season, with the Gators jumping out to a 14-12 lead, only to see it diminish as the Mustangs surged to a 28-22 advantage in a painfully played first half.

The Mustangs maintained the advantage entering the fourth quarter. Then it became Laquill Hardnett time.

The free-spirited senior, heading to Cincinnati, took over as he has done so often, and leading the fun bunch to their second straight title, 56-52. Hardnett finished with 32 points, 12 rebounds, and three fist pumps to the Bladensburg crowd.

That’s why he’s one of the most entertaining players I have seen in many a year. 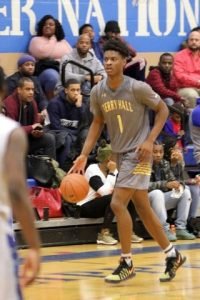 As for Perry Hall and its coach George Panageotou, never have I seen so much talent on a Baltimore County public school team since moving the area 30 years ago. Panageotou, in his quiet way, kept this loose and free spirited bunch together to amass two state championships. Job well done George.

Prior to the state public championship run, I had a week that was as exciting as any I have had in some time. Why? Because high school tournament basketball is a good as it gets.

My first stop took me up to Harford Community College for the MIAA A Conference championship game with John Carroll School going against an upstart, the extremely well-coached Boys’ Latin.

On paper, it was all JC, with two high major guards and a small forward who soon will be on that level. Boys’ Latin featured a hopeful low major, and a pair of sure-fire future small college stars.

No contest you say?

During an interview before the contest, I said it would respectable and competitive. It was that and more as BL coach Cliff Rees figured out how to contain the trio of Immanuel Quickly, Montez Mathis and Yuvez Gultekin, holding them to 46 points in regulation and force the match to overtime. 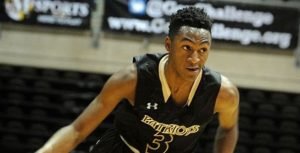 The Patriots withstood a terrific performance from 6-foot-4 senior wing Jaylin Andrews. He looked like he could be a real difference maker for most lower D-I programs.

BL gained a lot of respect this year by finishing in the Top 5 in nearly every poll. Cliff Rees, who was a great player at Navy in his own right, has taken his talents to the high school hardwood and Charm City is fortunate to have him. As for the game, I can’t remember seeing a better one all year.

Before hoisting another 4A state title trophy, Perry Hall survived two upstarts, Mervo and Dulaney, in the North Region playoffs.

Will Thomas, a talented 6-foot-5 senior forward kept Mervo in the game, posting 32 points and a whole lot of attitude. The Gators needed a late basket from junior Anthony Walker to win. Walker, 6-8, emerged this season as part of the “Twin Towers” with Hardnett (6-9) and Mississippi-bound Anthony Higgs (6-8).

In a nice touch before the match, Hardnett’s mom beautifully sang the National Anthem. She immediately took off her jacket to display a Cincinnati t-shirt, revealing for the whole world her son’s long awaited college choice.

LaQuill Hardnett is bold, but usually backs it up. Bearcat coach Nick Cronin will have his hands full, but is getting a multi-dimensional player who can help keep the Bearcats at the top of the heap in the American Conference and perennial NCAA tourney squad.

Well, guess what, on a lovely warm winter late afternoon in Baltimore for the right to travel to Xfinity, Perry Hall had one more hurdle. The Gators had to go to Dulaney and get by a young, but very talented squad. Now, retrospect this should have been the game for the County championship, but that’s another story for later.

In a game that featured seven, yes seven D-I prospects, most of them high-major, Perry Hall traveled to Baltimore County rival Dulaney. Never in my 32 years were there this many public school players of this level in the whole county, much less in one game. It made for great theater.

The game was nip and tuck all the way with Hardnett carrying the load for the Gators until he got into foul trouble. A budding star for Dulaney, 5-foot-11 freshman Ryan Conway started to heat up and showed why he is one of the fine young playmakers in his class, and kept the contest close.

But the real star of this game was 6-foot-1 Southern Utah recruit Josh Cornish. He kept Dulaney in the game until the end with two incredible 3-pointers from deep range, but Perry Hall survived to reach the North final where they defeated Paint Branch in Montgomery County.

As for Dulaney, stay tuned. Coach Matt Lochte and his youthful Lions maybe the team to beat in Baltimore County next winter, if everyone stays.

As this postseason proved, high school hoops is as good as it gets.