No. 1 Panthers hold off McDonogh in IAAM A hoops final rematch, extend streak to 44 (VIDEO HERE!) 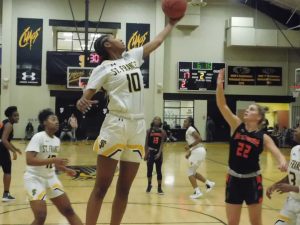 St. Frances’ Angel Reese nabs a defensive rebound in front of McDonogh’s Ava Class (22) during the first half of Friday’s IAAM A basketball game. Reese finished with 23 points and 13 rebounds as the top-ranked Panthers remained undefeated in IAAM A play with a 51-41 victory inside Phelps Gymnasium in east Baltimore.

The somewhat dueling views haven’t slowed down No. 1 St. Frances Academy girls basketball which posted a 51-41 decision over third-ranked McDonogh School in an IAAM A Conference match in east Baltimore.

Leading by as many as 17 points, the Panthers fended off several McDonogh charges in the second half to extend their IAAM A regular season win streak to 45 (44 including  playoffs). St. Frances, ranked 19th in the latest USA Today Super 25, last IAAM A loss came in the 2015 semifinals against McDonogh School.

“This was a team win,” said Reese, who was recognized before Friday’s home game for reaching the 1,000 career point and rebound mark earlier this week on the road. “They’ve played for me three years and they know exactly what I can do. So tonight was about what other players can do.”

But longtime Panthers coach Shelton wants his young players to be more proactive with Reese on the floor.

“They have to recognize situations better and understand when they’re not being guarded and take some pressure off of Angel,” said Shelton. “You don’t want to coach everything but sometimes things that’s common sense to us aren’t common sense to players.”

Trailing 11-7 early, St. Frances ran off 14 straight points, capped with Humphey’s rebound and basket off a Reese miss, for a 10-point advantage midway in the second. The East Chase Street school opened the second half with an 11-2 spurt, highlighted by six straight points from Humphrey, for a 38-21 advantage with 4 minutes, 21 seconds left in the third period.

McDonogh, which lost to St. Frances in the past three IAAM A finals, refused to go away. The Eagles pulled to 38-30 late in the third after Ava Class scored off a pass from Julia Dorsey.

The Owings Mills squad got the deficit under single digits several times in the fourth quarter, the last at 47-41 after a Treasure Valdes’ free throw with 2:52 left in regulation. Reese hit two free throws and senior guard Savawn Hughes found Emaree Hinton for a layup, putting St. Frances back up double digits.

“We had one stretch in the third quarter we went five or six minutes without scoring, you can’t do that against them,” said McDonogh coach Brad Rees. “I’m happy with the way we fought back. We didn’t play as well I think we’re capable of.”

“They’re good solid defensive team so we needed to protect the basketball and finish plays around the basket,” said Shelton. “Brad gets his kids to play very physical. They made Angel work for points.”

Reese knows she’s the focus of opposing teams, just like past teammates and VSN Player of the Year Mia Davis (now a sophomore at Temple) and Nia Clouden (freshman at Michigan State).

No. 1 Panthers hold off McDonogh in IAAM A hoops final rematch, extend streak to 44 (VIDEO HERE!)