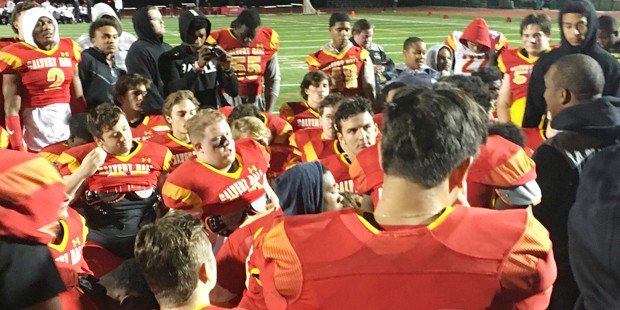 Archbishop Spalding football coach Kyle Schmitt had a quick and difficult decision to make in the waning moments of an MIAA A Conference showdown against Calvert Hall Friday night at Paul Angelo Russo Stadium in Towson.

Either way, the odds were stacked against the No. 4 Cavaliers after Calvert Hall junior quarterback Amir Jenkins’ 41-yard pass to senior wideout Cole Herbert gave the fifth-ranked Cardinals a first down at the visitors’ 10 yard line with just over a minute remaining in regulation and the hosts trailing, 17-16.

Schmitt’s choice was either for his team to die a slow death while Calvert Hall ran the clock down before taking a chip-shot field goal attempt by senior Pete Moore — who had already spilt the uprights from 23, 26 and 40 yards — or letting the Cardinals score quickly so the Cavaliers would get the ball back with just enough time to come all the way back.

Calvert Hall’s Sean Tucker bounced back from an earlier leg injury to score the game-winning touchdown in the final minute of the fourth quarter.

Ultimately, Schmitt figured that having the ball from Spalding’s 20-yard line with 47 second left in the contest was a better way to go after instructing his defense to allow Calvert Hall running back Sean Tucker to bolt virtually untouched into the end zone to give the Cardinals a 23-17 lead and, ultimately, triumph for their first conference win of the season.

Schmitt didn’t second-guess himself after the setback that dropped the Cavs’ to 5-3 overall and 1-1 in conference play while Calvert Hall improved to 5-2 and 1-2.

“It was a tactical maneuver,” he said. “We let them score and it didn’t work out. “They’ve gotten us a couple of times lately. (Calvert Hall coach) Donald (Davis) does a great job with their team. Their well-coached and they have a really good kicker, so we took a chance.”

Things certainly didn’t appear to be going Calvert Hall’s way during a game in which Spalding’s defense kept Tucker and Herbert in check for most of the night.

It was Calvert Hall’s special teams, defense and Moore’s leg that kept them in striking distance to make the final push.

The defense, spearheaded by senior defensive back Ty Trihn, senior linebacker Kahlil Glover and junior lineman Omari Lewis, made a game-saving stop on fourth down with just over two minutes remaining at midfield.

After Jenkins found Kainoa Sasaki for a 7-yard gain, the junior signal-caller was sacked by senior lineman Jahmeer Carter for a 2-yard loss.

That’s when Jenkins aired out a long ball down the right sideline that Herbert came back for to snare inches above the turf to set up the winning score.

“We felt like we had a matchup we really liked,” Davis said

Davis said her never thought of instructing Tucker to go down instead of scoring to take a field goal.

“We were playing it close to the vest,” the coach said. “We knew we could get three (points), but I just felt it was better to take the touchdown there. But here’s the thought process: I trust our defense.”

Even so, Spalding junior quarterback Austin Tutas, who had connected with senior tight end Dustin Radford in the second quarter for the Cavaliers’ first score, drove his team to the Calvert Hall 39-yard line on a couple of passes to junior receiver Bryson Carter before the drive stalled and the Cardinals celebrated.

After all, things looked pretty bleak for the home team after junior running back Shamar Esbrand-Smith’s stunning 50-yard TD run put Spalding ahead, 17-10. late in the third quarter.

Calvert Hall, however, capitalized on a botched punt to notch one Moore field goal and then stuffed Spalding at its own 26 early in the final quarter to add three more points to creep to within, 17-16.

Yet with the way Spalding’s defense, led by Carter, sophomore linebacker Kellen Wyatt and senior linebacker Jalin Justice, was playing, the Cavs seemed to be in control.

“I knew we couldn’t take another loss,” said Tucker, a Syracuse signee, who left the game with a leg injury before returning to get the final score. “A win like this will really get our morale up.”

Davis said that Herbert’s catch was indicative of his tenacity.

“He was getting grabbed and held a lot, but he’s a fighter and a tough kid and a great football player,” Davis added. “This was as complete of a win as we’ve had all season.”

Pictured above: Calvert Hall coach Donald Davis (far right) praises his players after their 23-14 win over No. 4 Archbishop Spalding on Friday night.