Mount Carmel’s Ta’Niya Kees (5) is denied by Forest Park’s Josias Mickens during the second half of Thursday’s girls basketball contest at the Basketball Academy. The Foresters defeated the No. 20-ranked Cougars, 43-34, at Morgan State University’s Hill Field House.

Edmondson High boys basketball coach Darnell Dantzler doesn’t care much for “style points.” For most of its match against Calvert Hall College Thursday, the Red Storm struggled to shake off the shorthanded Cardinals.

The No. 11 Red Storm were able to put things together in the fourth for a 61-47 victory at the 23rd Basketball Academy at Morgan State University’s Hill Field House. In girls action, Forest Park defeated No. 20 Mount Carmel, 43-34.

Two contests – No. 6 Pikesville girls vs. Institute of Notre Dame and Randallstown/National Academy Foundation boys – were postponed due to weather. The Randallstown/NAF match will be played Friday afternoon.

In its first Academy appearance, Forest Park got 16 points from Nakiyah Johnson. The Foresters (9-2 overall) opened up a 10-point advantage after three quarters.

Forest Park coach Jermaine Dunn was pleased to see his team stay vigilant after an early morning practice and attending several Academy workshops during the day.

“It’s been a long day, but I’m proud of the effort,” said Dunn. “They didn’t give up. I think it was the speeches we received during the classes, the camaraderie and team-building activities.”

“We’re still learning and building,” said Johnson, a senior. “We have some injuries and just getting some people back.”

Mount Carmel (11-4) got 13 points from Jaylah Lewis. After gaining their first-ever VSN Top 20 ranking, the Cougars put together arguably their worst showing of the season.

“We played like we were deer in headlights,” said Mount Carmel coach Rob Long, whose team is back at Morgan Saturday against No. 11 Western. “You expect senior leadership and we didn’t get it. There’s no excuses.”

“I’ve had veteran teams in the past, but I’m looking forward to this young group,” said Dunn. “We have a brand new facility, so we’re attracting more talent. This team really enjoy each other.”

Edmondson collected its 12th victory in 13 outings as junior Tre’Shawn Lewis scored 21 points and Daniel Frink scored all 14 of his points in the second half. Amir Jenkins led Calvert Hall (5-13) with 18.

“We’re going to have games where the offense isn’t flowing and we missed a couple of defensive assignments,” said Dantzler. “We played with no energy.”

“Coach [Dantzler] got in us pretty good at halftime so we had to come out aggressive,” said Frink. “We let our defense create turnovers for the offense.”

Frink, a 5-foot-10 junior guard, was the Red Storm offense in the third. He knocked down a 3-pointer to break a 33-33 tie, came up with a steal and went in for a layup and converted 3-point play as Edmondson led 42-37 after three.

“We were out of whack on both ends and I made some personnel adjustments,” said Dantzler. “Danny [Frink] and Tre [Lewis] gave me energy they didn’t seem to have in the first half.”

Frink opened the fourth with an assist to junior Barry Jones an inside score, followed with Lewis defensive rebound and outlet pass to Eontae Nelson for an uncontested layup. After scoring off a drive, Lewis found Jones for another inside bucket, giving Edmondson a 50-37 with 5 minutes, 54 seconds left in regulation.

“Our coach usually turn us but we got start strong in the first and second quarter,” said Lewis, a 6-4 wing.

Calvert Hall, minus East Carolina-bound senior guard Logan Curtis, led 26-25 at halftime thanks to Jenkins, who dropped a 80-foot runner to end the first half.  The Cardinals tied the game at 33 on Terrence Henderson’s 3-pointer in the third.

“We stopped attacking the middle of the zone. They have a lot of length and they were getting out on threes,” said Hasson. “We weren’t collapsing and getting kick-outs like we were earlier…That’s a very good team [Edmondson], they’re really long and have long guys who can handle the ball.” 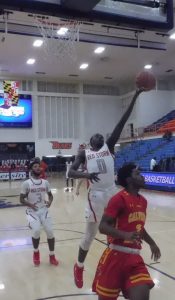 Edmondson’s Eonta Nelson goes up for a layup early in the fourth quarter of Thursday’s boys basketball contest with Calvert Hall College at the Basketball Academy. The No. 11 Cardinals improved to 12-1 with a 61-47 victory over the Cardinals.

“Our offense might not be there every game, but our defense has to be,” said Dantzler. “I’ll take a scrappy win. I’m not looking for style points, just trying to get W’s. We’ve been fortunate.”